In 1925, the keel was laid for the Royal Netherlands Navy destroyer Hr.Ms. Kortenaer at Burgerhoutdockyard in Rotterdam. Three years later, the 98 m long ship entered service in the East Indies. In early February, 1942, Kortenaer was grouped with an attack squadron led by Rear-Admiral Karel Doorman, which was to thwart the invading Japanese forces at Bali. However, the ship stranded on a sandbar and was unable to participate in the (failed) attempt.

On February 27 , 1942 Kortenaer saw its first combat action during the Battle of the Java Sea, which would seal the fate of the Dutch East Indies. While sailing off the Javanese north coast, the American-British-Dutch-Australian Command fleet under Dutch Rear-Admiral Karel Doorman, was surprised by two Japanese heavy cruisers, Nachi and Haguro.

Soon, the Allied forces found themselves under heavy fire from the high caliber Japanese guns. Doorman, however, managed to get his ships in range to return fire. Even though both sides exhibited poor gunnery and torpedo skills during this first phase of the battle, Hr.Ms. Kortenaer was hit by a Japanese torpedo salvo. The Dutch ship sank with the loss of 60 crew members. 113 survivors were rescued by the HMS Encounter. Later that day the Allied ships Exeter, De Ruyter, Java and Jupiter were also sunk by the Japanese. The battle factually eradicated Dutch presence in South-East Asian waters and marked the end to the Dutch colonial age. 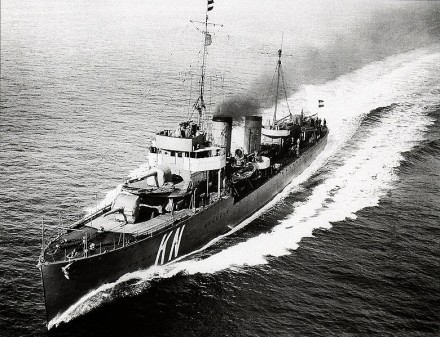 The wreck of the Java was discovered at a depth of 52 m off Bawean island, using side-scan sonar and diving inspections during an expedition led by Kevin Denlay in late 2004. The stern section of Kortenaer was found lying on its starboard side in good condition. One set of triple torpedo tubes were also visible trapped in large amounts of fishing nets that was draped over the wreckage. This provided the evidence for the wreck's identification, as no other warship lost in the area had triple torpedo tubes. No pictures of the wreck are available, due to the extremely poor visibility under water.

Verification of the disappearance;
Appreciation of what had happened; and
Future cooperation to manage remaining maritime cultural heritage.
For more information on this joint Dutch-Indonesian investigation see:
Java Sea dossier