HMS Indefatigable was commissioned in 1911 as an enlarged version of the earlier Invincible-class (see: HMS Invincible). She was first deployed in the Mediterranean, where she successfully carried out bombardments on several Ottoman fortifications during the Allied Dardanelles campaign in the first World War.

After joining the Grand Fleet in the North Sea, HMS Indefatigable was active in the Battle of Jutland during May 31 - June 1, 1916, where she was the first of three battlecruisers ultimately sunk. Around four in the afternoon on May 31, Indefatigable was struck by two or three German shells. Minutes later, more hits followed the first initial strike, causing the magazines in both the forecastle and the forward turret to explode. Indefatigable began to sink by the stern, listing to port. The most likely cause of her sinking was an explosion that blew out her bottom as well as severed her steering control shaft. Not long after taking her first hit, Indefatigable sank, taking with her almost her whole crew of 1019, of which only two managed to survive to be rescued by a German torpedo boat. 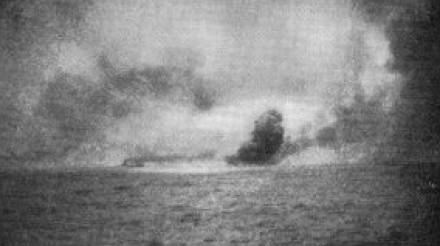 Photograph of the HMS Indefatigable blowing up, May 31 1916.

The wreck of HMS Indefatigable was positively identified by the nautical archaeologist Innes McCartney in 2001. The wreck site has since been declared protected, along with other Jutland wrecks, under the Protection of Military Remains Act 1986. Despite this, when the wreck was discovered, it was clear that it had been heavily salvaged in the past. 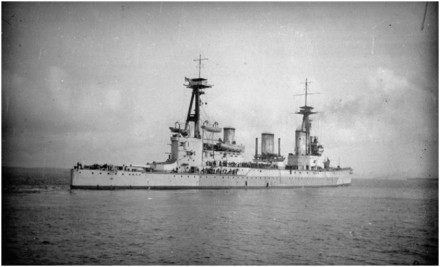 Photograph of the HMS Indefatigable, 1916.

Despite heavy commercial salvaging by German firms in the 1950's, nautical archaeologist Innes McCartney was able to locate the wreck of the HMS Indefatigable in 2001. The salvage operations had nevertheless left the ship in tiny pieces.As a war grave, the shipwreck, along with the other Jutland wrecks, is protected under the Protection of Military Remains Act 1986. 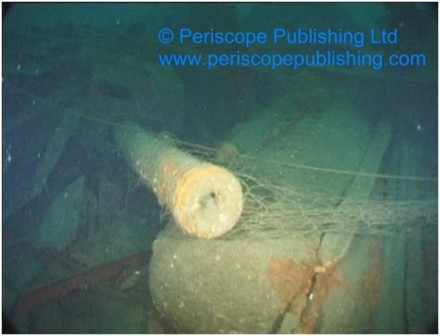 One of the ship's four-inch gun barbettes at the site. Source: Periscope Publishing.