Looking for a route around the West
Olivier van Noort was leader of an combined expedition - also known as the Magelhaanse Company - from Rotterdam and Amsterdam. The fleet consisted of four ships. Two large ships of 150 last: The Mauritius (from Rotterdam) and the Hendrik Frederik (Amsterdam). And two yachts of 50 last each: De Eendracht (Rotterdam) and De Hoop (Amsterdam).

The Rotterdam ships officially departed on July 2, 1598, but could only really set off on September 13, when the Amsterdam ships were also present. The purpose of the expedition was to find an alternative route to the Indies. Not via the Cape of Good Hope but via the Strait of Magelhaan, the southern passage along South America.

Strayed
After a stop on the African coast they crossed (January 8, 1599) to Brazil. They had nowhere to anchor there to stock up on food and water. The Portuguese and Indian resistance was fierce. It was decided to leave the Brazilian coast again and set course for the island of St. Helena to refresh and hibernate there (20 March). Almost everyone was sick and every day men died of scurvy. They sailed east but could not find the island of Saint Helena.

The ships got lost and eventually came to two islets; Martin Vaz and Trinidade. In terms of new stocks, it was rather sparse. There was little water and only seagulls as food. These which were easy to catch because they were not afraid of people (May 21).

Eendracht left behind
They soon set out again in search of the mythical island of Ascension that was supposed to be somewhere in the Atlantic Ocean. Instead, the fleet accidentally arrived at the Brazilian mainland at Rio Dolce for the second time. They dared not land here because of the many Portuguese and Indians they saw on the beach. Instead they anchored at an small island just off the coast called Santa Clara (June 2 1599). They brought the sick ashore and stayed foo abouy two weeks to recover. 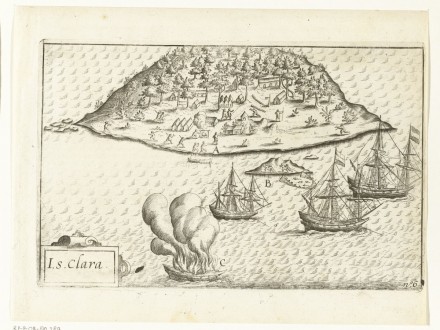 The leaking Eendracht had to be left there because it was no longer seaworthy. Cargo, guns and crew were divided. And the Eendracht was set on fire. On June 19, the journey to the south was continued.

After many hardships, Van Noort managed to reach the Pacific Ocean via the Magellan Strait together with De Hoop (which had meanwhile been renamed Eendracht 2, click here for the sequel). They had lost the Hendrik Frederik in the meantime. This would arrive at the Moluccas under its own power in February 1601.

The Mauritius would eventually moor in Rotterdam on 26-8-1601. This made this ship the first Dutch ship to complete a voyage around the world.