The ship
The Buytensorg was a Dutch East Indiaman (spiegelretourschip) sailing for the Dutch East India Company (VOC) as a merchant vessel between patria and the East Indies. In sources she is also reffered to as Buitensorg or Buitenzorg.

The loss
The Buytensorg was lost after her return voyage from the East. She arrived at Texel and was was undone of her cargo containing items such as peppergrain, sugar and tea. When it began to freeze to extreme temperatures in december the Buytensorg was one of the ships that got in trouble en was stuck by the ice. An attempt was done to save the ship and take her to the port in Den Helder. Unfortunately the ship got stuck on her way, got cracked open by the ice and sank in January 1760 at the Javaruggen. The loss was reported in the "Opregte Haarlemsche Courant" on the 7th of February 1760.

Since the ship had arrived at its destination the cargo had been taken of the ship prior to the loss. Therefore no salvage attempt was done after the loss of the ship. In present time there have been four periods of research: 1958, 1964, 1985 & 1986.

The wreck was discovered by A.C. Slooten in 1958 after some archival research on a wreck laying at the Javaruggen near Texel. Part of the keel of the Buytensorg was lifted from the wreck site and is on display in Lelystad Cultural Heritage Agency. 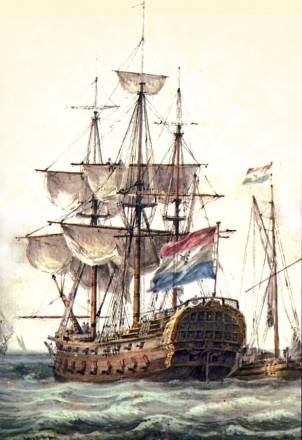