Analyses of the multibeam sonar from 2009 revealed a new shipwreck (BZN 18) 40 metres from the BZN 3 wreck. Prior to this, no clear structures had been visible. Dive research in 2013 revealed it to be a wreck approximately 25 metres long. Not much else is known about the site, except that it had already been severely attacked by Teredo navalis. Since 1850, the area has deepened by approximately 6 metres. It is striking that shortly after the appearance of the wreck at the seabed surface in 2009, a deep erosion pit quickly developed to the east side. In 2013, the pit reached its maximum depth of 3 metres. Subsequently, the scour pit was filled and completely levelled out in 2015.

During a dive survey in 2013, the height difference between the wreck and the east side was already more than 2 metres. This, however, had disappeared in 2015, when the area around the wreck flattened out. 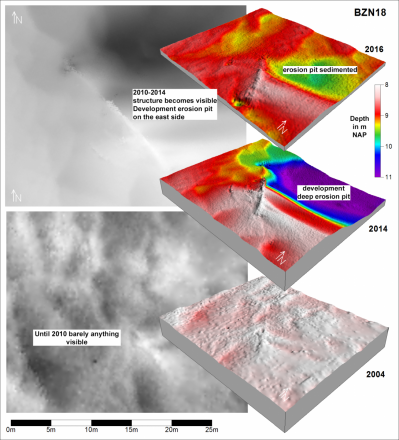