A maritime archaeological assessment of the waters around the German island of Fehmarn in 2008, within the scope of the construction of a fixed line between Germany and Denmark, led to the discovery of two shipwrecks from the 1600's, lying at a depth of 24 m. 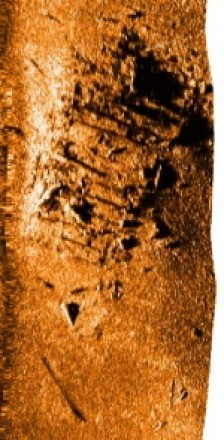 Both wrecks are situated at 25 meter water depth and were investigated with multi beam equipment, side scan sonar, magnetometer and a sub bottom profiler (Source: Vikingeskibsmuseet).

One of these was found to be in remarkable condition, and offered the archaeologists of the Viking Ship Museum a unique opportunity to study a completely undisturbed wreck site. The quantity of timber preserved, as well as the presence of numerous cannons and other artefacts surprised them. Some remarkable objects included rope, parts of the ship's rigging, cannon carriages and a soup bowl filled with cattle bones - an indication of the diet on board the ship. 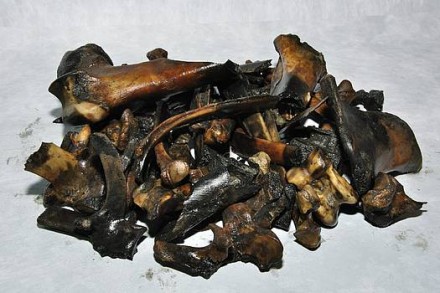 The content of a soup bowl found at the Fehmarn site: pig and cattle bones (Source: Vikingeskibsmuseet).

The location of the wreck closely matches that of the Battle of Fehmarn on 13 October, 1644. On that day, a combined Swedish-Dutch attack was carried out on a 17-ship fleet engaged a smaller Danish fleet. The Dutch Republic was mainly involved in the Scandinavian war for economic reasons, and had entrusted the famous Dutch entrepreneur Louis de Geer with handling the situation. He was able to assemble an auxiliary fleet, consisting of one frigate, three transports and 20 warships, bringing the fleet's total strength to 38 ships. At the end of the battle, 10 Danish ships had been captured and two wrecked, while only one vessel was lost on Dutch-Swedish side. The victory was one of the greatest in the history of the Swedish Fleet, and was a turning point in the war.

As the cannon found at the site were determined to be made in Sweden, the Fehmarnwreck is thought to represent the only Dutch-Swedish loss of the battle: the Zwarte Arend. Originally a hired Dutch merchant ship, Zwarte Arend was outfitted and armed in Sweden by order of De Geer. The identification is supported by dendrochronological analysis of the ship timbers. This established a felling date of 1628/1629 and pointed towards a North-German origin of the wood, in accordance with other Dutch ships from this period. 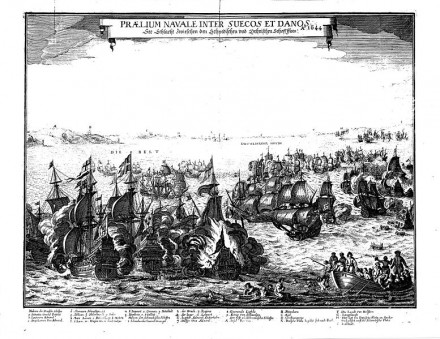 The Battle of Fehmarn, as depicted on an etching by Johann Peter Lotichius, 1651 (Source: Wikipedia commons). 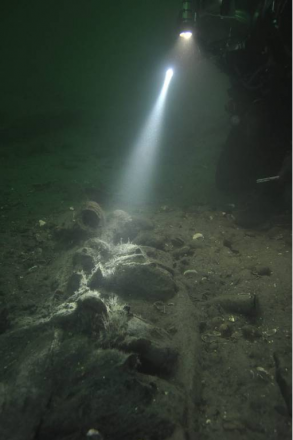 A diver inspects the wreck of the Zwarte Arend (Source: Vikingeskibsmuseet).

Since its discovery in 2008, the Zwarte Arend's existence and location have long been kept secret in order to safeguard it against treasure hunters, even though the wreck is already protected by German and Danish law. During the underwater research several items were carefully lifted and conserved for analysis and identification of the ship, but most of the wreck has been left in place. The most important goal of the investigations was to find out the extent of the wreck site on the seabed in order to establish a safety zone around it, so that it will not be destroyed by the anchors and stabilizers of the huge vessels that will be used for construction of the fixed Fehmarn Belt link. A full report on the project is currently in preparation by researchers of the Viking Ship Museum in Roskilde.