The Woerden 7 was unexpectedly found in June 2003
on the Nieuwe Markt or Woerden. It turned out to be a vessel with a combination of rowing and sailing options.

The Woerden 7 was a Roman barge or flatboat. These kind of ships are well known in the Netherlands. Similar ships were found in Zwammerdam during the 70's and De Meern in 1996.

It is a simple type of ship, a flat horizontal bottom with vertically brims. The mast was located at a third from the ship's front. These ships were used to transport goods or people. 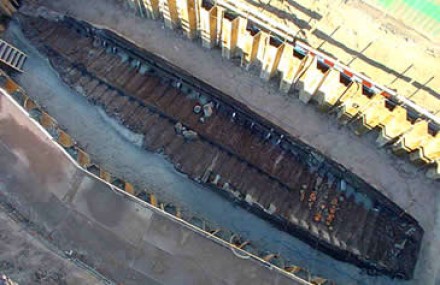 Unique evidence concerning the way of propulsion on the Woerden 7. Notches in a horizontal board may be used to secure seats on which the crew sat while rowing. On a vertically board holes were found. These holes showed wear-damage which is probably caused by oars. 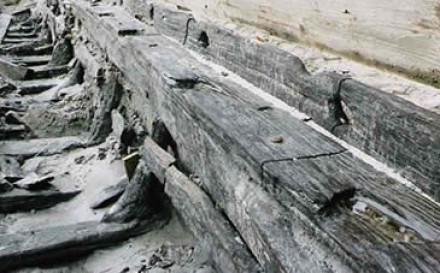 The notches where seats were fitted.

At the bottom of the rowing-facility, leather shoes were found. It was assumed that rowers took out there shoes while rowing, to gain better grip on the wet and slippery wooden floor. 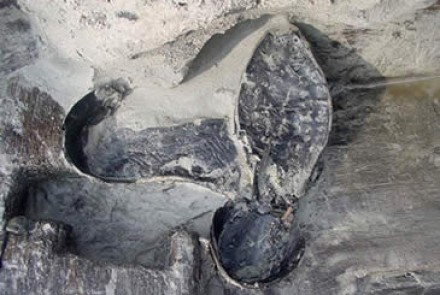 Part of a leather shoe.

On board of the Woerden 7 the excavation team found a concentration of tuff and brick. These are most likely the remains of a hearth. Traces of soot also point in this direction. 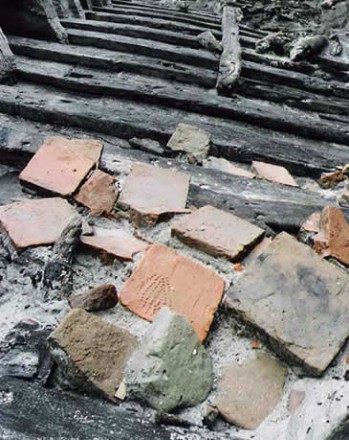 Tuff and brick from the hearth.

June 2003, during the construction of a profile at the Nieuwe Markt in Woerden, the remains of a shipwreck were found by an archaeological company. The wrecks date was estimated at 158 AD.

A three-day pilot-study was planned to learn more about the wrecks exact location, length, the conservation state and its surroundings. This pilot study was realized in August 2003.

The excavation took place from September until November 2003, the development and reporting from June 2005 until January 2007.

Profile of the Woerden 7. 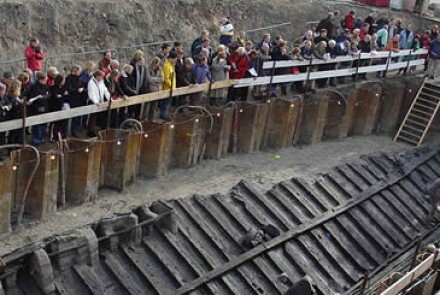 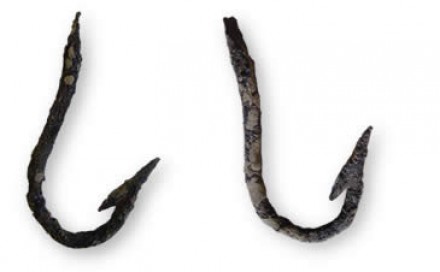 Fishing-hooks were found underneath the wreck.

The blue parts indicate the repairs which were made with Dutch wood.

Building technique: Roman with local features. The flatboat was used as a river cargo ship.

Flatboats are usually rectangle boats with a shallow draft. Its propulsion was provided by a mast with a square sail and the stream of the river on which it sailed. The Woerden 7 was also equipped with a rowing facility. 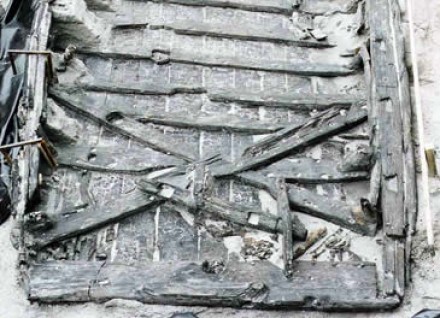 The ship is located at the inner curve of a former Rhine meander, Southwest of the castellum Laurium.

The Limes. Number 15 is Laurium. 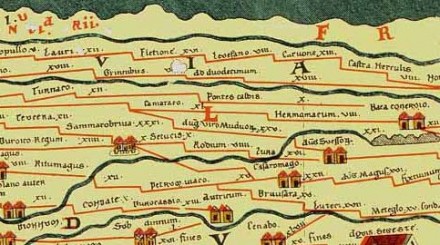 A total of six Roman ships were found in Woerden since 1576. 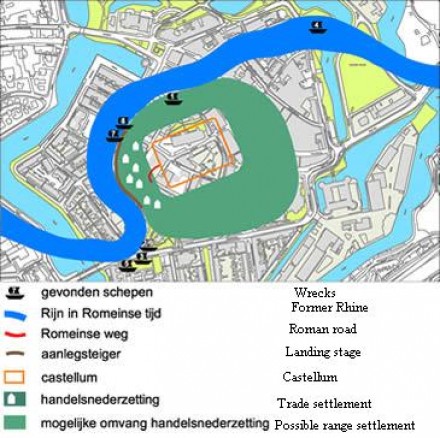 Woerden around the year 100 AD.

The most spectacular part of the Woerden 7 (its rowing facility) will be preserved ex situ. During the excavation the archaeologists came in contact with the Römisch Germanisch Zentral Museum which lies in Mainz, Germany. A part of this museum is the Museum für Antike Schiffahrt. Head of the preservation department Markus Wittköpper agreed to preserve the wood of the Woerden 7. 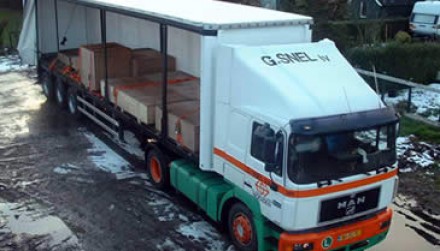 Transportation of the Woerden 7