The southeastern shore of Bonaire has long been a treacherous place where numerous ships have wrecked throughout the past five centuries. At night, this flat part of the island was almost impossible to see by passing sailors, particularly on nights when there was no wind and the sound of the waves crashing into the shoreline was lacking.

For this reason, in 1730 a plan was devised to erect a lighthouse at the southernmost tip of the island. The commission that evaluated the proposal, consisting of three merchant captains, rejected the plan, the reason being that the lighthouse would serve as a beacon for pirates and privateers, making it easier for them to navigate. Soon after the decision was made, one of the captains who rejected the proposal ironically wrecked his ship on Bonaire’s southern tip, and he perished.

In the early 1760s, it was decided to place a beacon on the island’s southern point. The beacon consisted of a pile of stones with a fire on top, serving the same function as a lighthouse, albeit a bit more primitive (Hartog 1957:72). The beacon was not very reliable though. In 1817, the Dutch warship Ceres crashed into the reef on the southeastern tip of the island (Hartog 1957:189). Even though this was bad news for ship, captain, and crew, it created opportunities for the people of Bonaire. After a ship wrecked, people would flock to the beach to take whatever cargo would wash ashore. 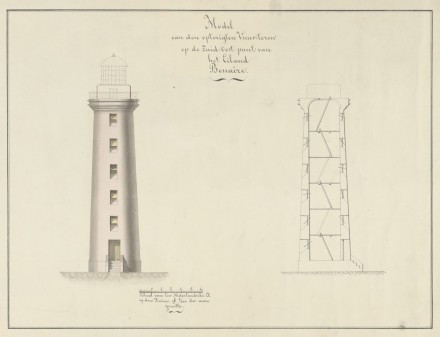 Plan drawing of the Willemstoren lighthouse, held in the Dutch National Archives in The Hague, inventory number 4.MIKO-582.

The wrecking of the Ceres showed that a proper lighthouse was badly needed. Finally, on March 22, 1837, plans were ready for the construction of the Willemstoren lighthouse, and the first stone was laid. Within two months, the tower was almost ready. It took more than one year, however, until the lighthouse was finally ready to be used, as the lantern and lamps had to be imported from Europe. The lighthouse was inaugurated on August 24, 1838, King Willem I’s birthday. The construction of the lighthouse was partly paid for with donations from neighboring Curaçao. Curaçaoan merchants’ businesses were affected by the situation on Bonaire, as their trading activities were disrupted by ships foundering on Bonaire. Therefore, they donated 3,000 guilders to the project (Hartog 1957:149-150).

The Willemstoren lighthouse with the keeper's house on the left.

The building next to the Willemstoren served as the keeper’s house. It features several small rooms and a cistern on the sea side. It was badly damaged during a hurricane in 1877 (Hartog 1957:248). Coincidentally, the same night the hurricane wreaked havoc on Bonaire, an earthquake struck as well. It was eventually restored with reinforced concrete. Historical documents indicate that people on warships sailing to or past Bonaire frequently complained about the lighthouse not being lit on time. The keeper furthermore did not keep many records, as very often the used amounts of oil could not be justified. It is likely that he sold the oil to make a little extra money on the side.