Vrouw Maria was a two-masted merchant ship that wrecked en route from Amsterdam to St. Petersburg in the autumn of 1771. It was on a stormy night in the outer archipelago of Nauvo, that left her heavily damaged; a few days later she sank. According to the entries of the Sound Customs House in Denmark, she carried a cargo of sugar, dyestuff, zinc, cloths, and single items for which the customs fees seem unusually high. Vrouw Maria is known as a treasure ship because of her cargo consisting of art treasures bought by Russian aristocrats and Catherine the Great, including Dutch paintings from the 17th century. A part of the cargo was salvaged soon after the shipwreck, but the majority of it went down with the ship.

The wreck was discovered using a side scan sonar in 1999. The Finnish Maritime Museum started field research on the wreck in the summer of 2000. Researchers, who were aided by a group of voluntary divers, documented the wreck by photograph and video. The work in different archives goes on. As a result of the studies in different archives, we know about the quality of Vrouw Maria's cargo, the events of the shipwreck, the attempts to salvage the ship, and about the subsequent phases of some of the things that were salvaged. 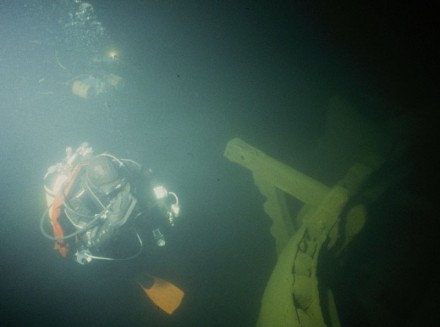 Divers by the bow of the wreck. Photo by Jouni Polkko

The very first documents about the history of Vrouw Maria were found by Dr. Christian Ahlström in the Finnish National Archives as early as in the 1970's. Ahlström gathered up pieces of information from different archives and he published them for the first time in 1979 (Sjunkna Skepp, Lund). The most important source for researchers is the ship's protest, which was found in the municipal archives of Turku. The document consists of an extract of Vrouw Maria's logbook and a list of the things that were salvaged. In the Diplomatica Collection in Riksarkivet, the Swedish National Archives in Stockholm, there is diplomatic correspondence concerning the attempts to search and salvage the ship.

Mr. Rauno Koivusaari and other members of a society called Pro Vrouw Maria managed to locate the wreck using a side-scan sonar in the summer of 1999. 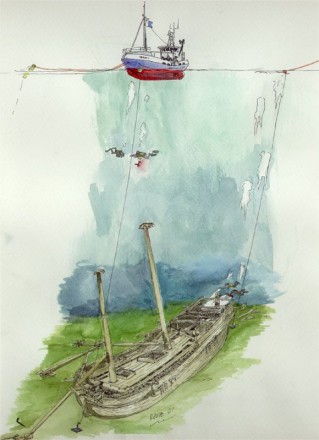 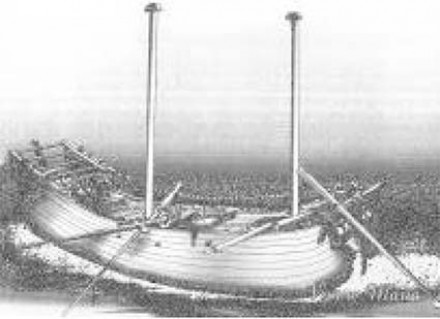 The most interesting find by Finish researcher Christian Ahlstrom on the provenance of the ship was a sales contract dated August 18, 1766 (sales of ships through brokers, file nr. 5071, Gemeente archief Amsterdam). This document mentions the koff ship Vrouw Maria.

It was discovered that the main-mast of the wreck bore traces of the fittings of the snowmast which had been removed when the ship was rebuilt as a koff ship. 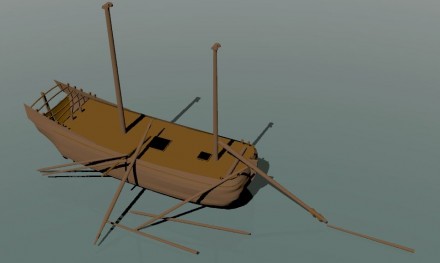 3d drawing of the Vrouw Maria.

At the depth of over 40 meters, the wreck appears well preserved.

Vrouw Maria is located in Finnish territorial waters. It is protected with a special protection area established around the site; diving and anchoring is prohibited without a permit from Finnish Heritage Agency.

Interactive installation of the Vrouw Maria.