The Vergulde Draeck sailed in October 1655 from Holland to the East Indies, bound for Batavia, what is now Jakarta, with a cargo valued at around fl. 185,000. From the Cape of Good Hope, she had to travel around 5000 miles east before turning north to head for the East Indies. This route, with the sharp left turn near Australia, was known as the Brouwers route.

Unfortunately, The Vergulde Draeck sailed too far east and met the Western Australian coast. On the 28th April, 1656, she struck a reef near the Suydland (Australia). Only 75 of the original 193 men on board made it to the shore.

Seven sailors were sent to Batavia in an open boat in search of help. They reached Batavia after 41 days. The Dutch authorities sent two ships to retrieve the cargo (minted silver along with cargo worth 90,000 euros) and the crew, but the ships did not succeed. Two more expeditions were sent, but both failed to recover any members of the missing crew. 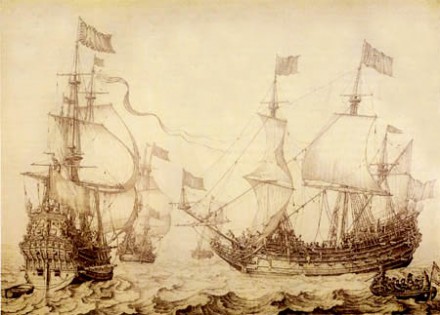