History of the German internees

When the war broke out for the Netherlands on 10 May 1940 all Germans in the Dutch East Indies were imprisoned. Most of them had lived for decades in the colony and among them were artists, missionaries and even Jews who had fled Europe. More than 2800 'Germans' were interned in a internement camp Lawesegalagala on Sumatra.

When Japan attacked Pearl Harbor (on 7-12-1941) the Dutch government wanted to move the Germans to British India. This was to prevent them from helping the Japanese invasion forces. Two transports to Bombay were successful but the third with the Van Imhoff met with disaster.

On 19 January 1942, a Japanese plane attacked the Van Imhoff and a near hit of a bomb struck a hole in the hull. The Van Imhoff started to sink slowly. On board were 478 prisoners guarded by 62 KNIL soldiers and 48 crew members. The crew and soldiers manned 5 of the 6 the lifeboats and left the prisoners behind. The Germans managed to free themselves and got on deck only to discover that the crew and guards had fled and only one lifeboat was left for 478 men. Chaos and panic broke out. Some killed themselves, some jumped overboard, while some started drinking to soften a certain death.

Eventually the last lifeboat with 50 Germans, a small dinghy and some bamboo rafts made it off the Van Imhoff. The next day a rescue ship Boelongan spotted them. They asked if there were Dutch soldiers or crew among them. When denied the Boelongan turned and went back to the harbor without helping the survivors clinging to boat and rafts. Only 67 of the 478 prisoners survived the disaster.

The survivors reached Nias island on 20th January but as soon as they landed they were imprisoned again. The Dutch crew and soldiers by then were already rescued save and sound. This war crime of deliberately leaving the 478 German detainees behind when escaping themselves from the sinking ship was never properly investigated.

In Dutch media the subject was almost non existent. The broadcasting of a television documentary made in 1965 was twice prohibited. And the film disappeared. In 2017, BNN/VARA broadcast a three-part documentary (see the link in references) about the disaster, in which VARA's own role was also central. In september 2021 the Dutch cabinet has commissioned a historical investigation into the disaster with the steamship Van Imhoff in early 1942. The Netherlands Institute of Military History (NIMH) investigation will take two years to complete. The personal history of as many victims as possible will be discussed, as well as the circumstances of the drama with the Van Imhoff and the long aftermath, including the role played by authorities, journalists, documentary makers and historians.

Ironically the name of the ship Van Imhoff comes from Van Imhoff (1705-1750) who was Governor general of The Dutch East indies. His father was a German freiherr. 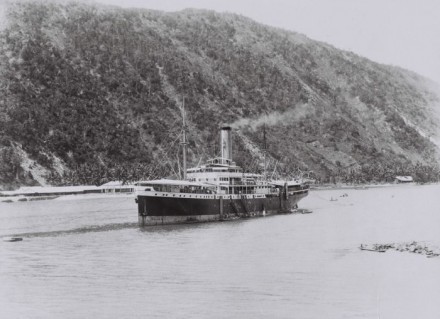 Van Imhoff in the bay of Gorontalo (Picture: Tropenmuseum).