On September the 28, 1648, a flotilla of seven Dutch ships under command of Admiral Witte Corneliszoon de With was raiding along the Brazilian coast, when two Portuguese ships were sighted. Admiral De With quickly moved to attack, steering the flagship Brederode towards the enemy, aided by four other ships. While engaging Nossa Senhorade Rosário, Brederode's rigging got entangled and the Portuguese ship was able to escape.

Rosário's luck, however, was short-lived. The captains of the fast yacht Utrecht and the Huis van Nassau managed to flank the Portuguese vessel, and prepared to board. In a desperate attempt to avoid capture, the Portuguese set fire to their own ship, hoping to damage the Dutch ships as well. The explosion that followed not only took down the Rosário, along with most of its crew and a group of Portuguese nobles on board for sightseeing, but the Utrecht as well. 400 Portuguese and 150 Dutch sailors lost their lives in the incident. 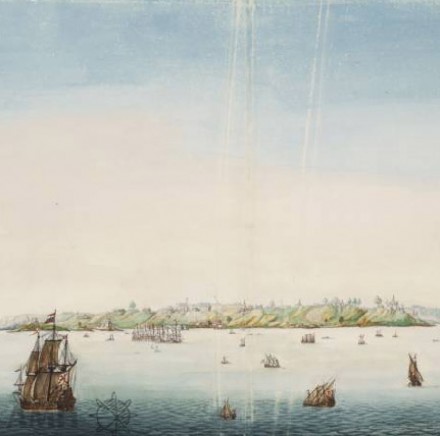 View on Salvador from the bay as depicted in the atlas by Johannes.

The Utrecht wreck site, lying near Bahía, at a depth of about 20 m, and some 200 m from the Nostra Senhorade Rosário, was first officially explored in the years 1981-1982. A contract with the Brazilian Navy granted salvage rights to a Brazilian company named SALVANAV and a Canadian company owned by well-known American treasure hunter and author Robert F. Marx.

20 percent of the artefacts was to be picked by the Navy to display in the recently created Navy Museums in Rio de Janeiro and Bahia. The companies operated freely until 1983, when news arrived of an auction of artefacts from shipwrecks held at Christie's in Amsterdam. A set of exceedingly rare Dutch coins, minted in Brazil in 1645 and 1646 sold at the auction were suspected to have been illegally exported against the rules of the contract established with the Brazilian Navy. In consequence, Brazil suspended all contracts and started working on specific legislation to regulate and protect the country's underwater cultural heritage. 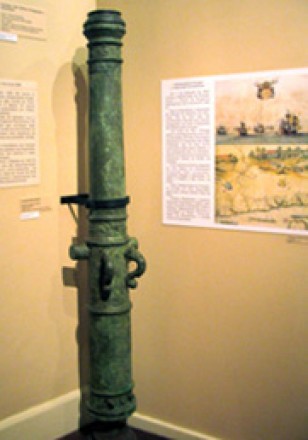 Canon of the Utrecht in the Rio de Janeiro Naval Museum.

During a short assessment of the Utrecht's condition in 2007, it was determined that despite all the wreck's recent history, large parts of the ship's hull had been well preserved. This prompted researchers from Texas A&M to catalogue and describe all objects that had been lifted from the wreck over the years during commercial salvage operations. 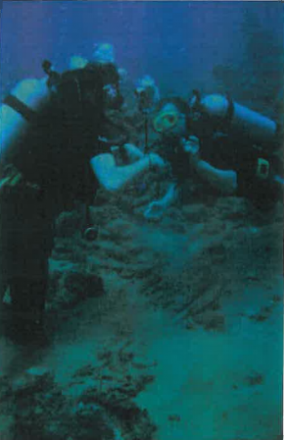 During the dives done after the International Symposium on Maritime Archaeology in the Americas in 2007, Martijn Manders (Dutch Cultural Heritage Agency) identified important hull construction features at the Utrecht wreck site.

The research was expanded upon in December 2012, when an archaeological programme was initiated by the Maritime Programme of the Dutch Cultural Heritage Agency in cooperation with Texas A&M, the University Bahia and The Brazilian Institute for Museums (then IPHAN). The site was mapped and possibilities for conservation were explored, involving local archaeology students. Analysis of the ship construction revealed that Utrecht’s hull consisted of three layers. While two of such layers were common practice for protection against damage from shipworm, further research will have to reveal the secret behind the third one.

Spelling in 17th-century Dutch is diverse and sometimes confusing. Also, the fact that there were at the same time in the Dutch Republican navy two ships called the Utrecht.

The one described in this record that sank in 1648, and one other active ship named the Utrecht (also a frigate). This second Utrecht was built in 1638 for the Admiralty of Rotterdam. It measured 100 Rotterdam ft (28.23 m: the Rotterdam foot measures 0.2823 m), and had 22 cannons.

The Utrecht was a frigate and built in 1633 in Amsterdam for the Admiralty Amsterdam. 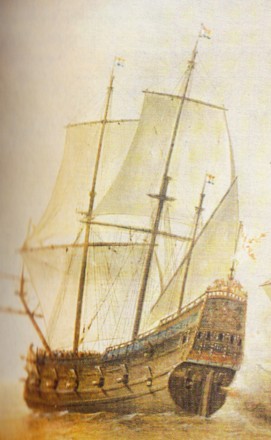 Partly salvaged in 1981/82 by SALVANAV under contract of the Brazilian Navy. Some extremely rare golden coins were auctioned at Christie's in Amsterdam. As a consequence, salvage operations were stopped and the Brazilian government conducted a new law (1986) in order to protect UCH.

During survey in 2007 it turned out that large parts of the construction were still in situ and future research promising.

From December 10-19, 2012 an archaeological research program was initiated by the Maritime program of the Cultural Heritage Agency of the Netherlands together with Texas A&M, University Bahia and IPHAN. The site is mapped, and data was collected on shipbuilding technique. Archeology students have been trained working on the Utrecht Site.