On a stormy New Year’s Eve in 1862, the USS Monitor, en route to Beaufort, North Carolina, sank off the coast of North Carolina’s Cape Hatteras. In 1973, nearly 111 years later, scientists aboard the Duke University vessel Eastward located the remains of the Monitor, lying upside down within the waters of the Graveyard of the Atlantic.

The Battle of Hampton Roads, often referred to as the Battle of the Monitor and Merrimack (or Merrimac), was the most noted and arguably most important naval battle of the American Civil War from the standpoint of the development of navies. It was fought over two days, March 8–9, 1862, in Hampton Roads, a roadstead in Virginia where the Elizabeth and Nansemond Rivers meet the James River just before it enters Chesapeake Bay. The battle was a part of the effort of the Confederacy to break the Union blockade, which had cut off Virginia's largest cities, Norfolk and Richmond, from international trade. 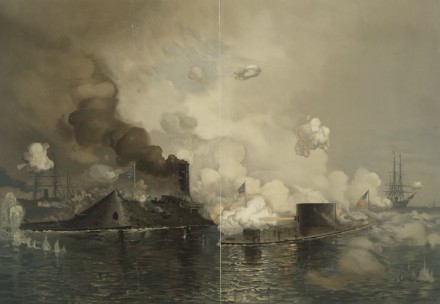 The Monitor and its turret were the prototype for today's modern, all-metal warship

Model of the Monitor.