On the 10th of July 2007, the underwater archaeology team of the RACM (now the Cultural Heritage Agency of the Netherlands (RCE)) together with a team from Rijkswaterstaat IJsselmeergebied, conducted a one-day survey on a shipwreck that was discovered in front of the harbour of Urk.

Urk is a typical small fishing village on the northeast side of what has been the Zuiderzee. It is the smallest municipality in the province of Flevoland. Urk was an island until 1939, when a dike connected the village with the mainland at Lemmer. A few years before, in 1932, the large Afsluitdijk had been finished, closing off the Zuiderzee and the open connection with the sea.

In 1942, all the land North east of Urk was reclaimed: the Noordoostpolder. This fully connected the village with the mainland.

However, the island feeling still exists. One doesn't live in Urk, but still on Urk! Urk is still very much connected with the water. The village itself lies on the shores of the IJsselmeer, but it has the biggest fishing vleet in the Netherlands, with ships active in every corner of the world.

The coat of arms of Urk.

Urk 1 is a fishing boat of recent date. We believe it sank in the first half of the 20th century. The wreck (approximately 14 x 5 metres) is that of a flat bottom boat which has sunken away in the seabed almost completely. Only a maximum of 1 metre of construction is surfacing. The IJsselmeer (lake) is only 4 metres deep at the wreck site.

The aft of the ship with deck, stern and rudder is still present. Also a bun can be seen. The bun is situated more or less in the middle of the ship. It is the place to keep the fish that were caught alive. The outer planking is perforated with small holes which keeps the surrounding seawater flowing in. Towards the bow and the stern, the bun is closed of with a large heavy wooden partition wall (Dutch: bunschot). The bow of the ship is very much disturbed and the stern itself is ripped off the construction. However, a deck is still present here. 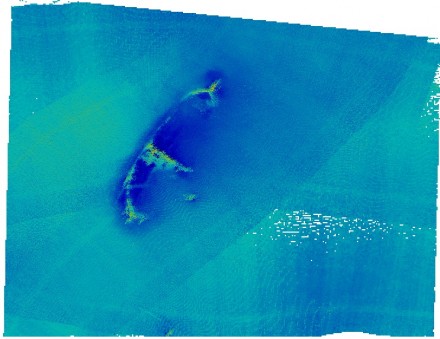 Multibeam image of Urk 1. You can see the partition wall (bunschot), the stern (top) and the bow (below).

The ship has been constructed mainly in wood. However, the wooden hull is also sheeted with iron. The reason for this can be the following: when it was known that in 1932 the Zuiderzee was going to be closed off from the Wadden Sea and North Sea, due to the creation of the Afsluitdijk, it was also clear that at least half of the ships actively fishing in the Zuiderzee were supposed to stop their activity and a large buy-out was going to be set up.

Due to this, many people prolonged the lives of their fishing ships until the moment of buy-out. After that many of the ships were deliberately sunk or grounded. In 1997, the former NISA also did a research on several dumped ships from that same period along the river IJssel in Kampen. 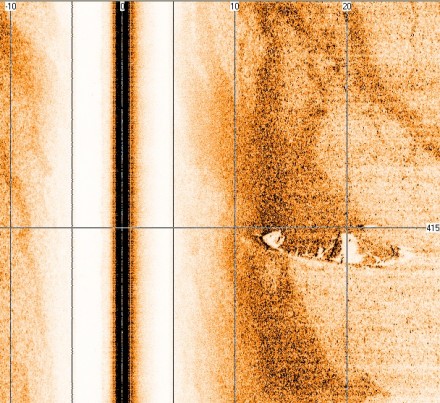 The side scan sonar image of the Urk 1.

The site has been dated using the typology of the ship, the use of different materials, and very characteristic: the sheeting of the original wooden planking with iron.

Wood samples for dendrochronological research were also taken. However, although the samples had enough year rings, we were not able to date the oak wood. 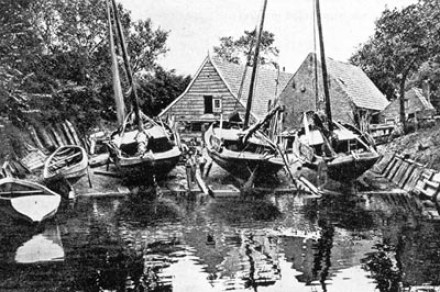 Flat-bottomed fishing ships on a wharf in the Netherlands.

The site is considered to be of low archaeological value. It - however - does have significance for the region (around the IJsselmeer) and a specific period (closing the Zuiderzee in 1932). The RCE will not take any actions on the site, due to the fact that she takes the responsibility for sites that are of national and international significance. It doesn't mean the site has no significance (see above) on a local level!