UC-71 was a German type UC II minelaying submarine of World War I, which was ordered on 12th January 1916 by the German Imperial Navy, launched on 12th August 1916 at the Blohm & Voss shipyard in Hamburg, and commissioned into service on 28th November.

The submarine was credited with the sinking of 61 vessels during the war. As part of the Versailles Peace Treaty, the submarine was to be surrendered to the United Kingdom, but at the start of the voyage the vessel sank on 20 February 1919. According to the captain's claims this was due to the bad weather conditions.

In 1997, the wreck was identified as UC-71 by the wreck-divers Ingo Oppelt and Tomas Termote on the basis of the embossed type number on the submarine's propellers. An underwater artist's impression of the wreck (below) demonstrates the great overall state of preservation. 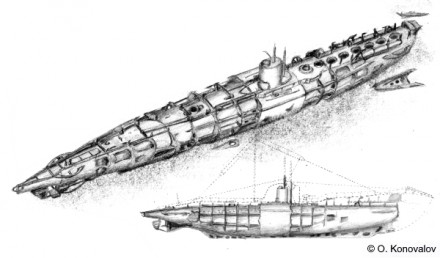 The recent discovery of the diary of one of the crew-members, published by Dr. Florian Huber, revealed that the vessel was intentionally scuttled, commented in the diary thus: "No Englishman should step on the boat, that was the will of the crew, and they achieved it."

This piece of evidence is congruent to the observation that the flood valves were minimally opened.

In summer 2016, the 4.1 metre long and almost 200 kg heavy net cutter of the UC 71 was recovered by SUBMARIS on behalf of the Heligoland Museum, using lifting bags and an electric winch. It was brought to the State Archaeology Museum at Gottorf Castle in Schleswig for conservation.

The wreck is under legal protection and has been entered into the list of monuments on 20.7.2015 by the State Archaeology Department of Schleswig-Holstein (ALSH). As one of the very few WWI submarines well preserved and in situ, it is a historical wrecksite of outstanding significance.