The SM U-106 was a submarine that served in the Imperial German Navy in World War One. It was under the command of Kapitän leutnant (a rank similar to U.S. and British ranks of Lieutenant or Lieutenant Commander) Hans Hufnagel. U-106 was officially commissioned for the Imperial German Navy 28 July, 1917, and began her first, and only, wartime patrol on September 2, 1917.

A little over two weeks later, on September 18 and during the First Battle of the Atlantic, U-106 was credited with the sinking of the HMS Contest, an Acasta-class destroyer, as well as with damaging a 5,867 ton steamer, City of Lincoln, in the Western Approaches. The Western Approaches, a term mostly used in naval warfare, refers to a geographical area of the Atlantic Ocean just west of the British Isles.

After her military success in the First Battle of the Atlantic, U-106 was in the North Sea, off the coast of the Dutch island Terschelling, where she fell out of radio contact on October 7th. She shortly there after struck a British mine, and sank with the entire crew of 41 men. 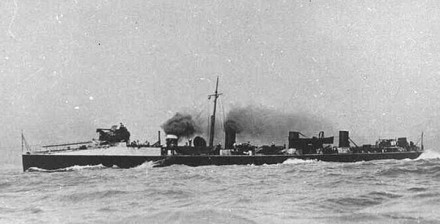 In 2009, the Royal Netherlands Navy, while charting sea routes, discovered the remains of an old submarine. First thought to be a Dutch submarine lost in 1940, it was soon realized to be a sub of much older origin.

After official identification by German authorities, and the notification of the families of the lost crew, it was announced in 2011 that the remains of U-106 had been discovered, and that the site would be declared a war grave.

The wreck of U-106 was discovered by the Royal Netherlands Navy in December 2009 at a depth of 40 meters. In February 2010, a new survey led to the find of a copperplate which revealed the wreck's identity.

The site now enjoys legal protection as a war grave of the 41 men lost on 7 September, 1917. 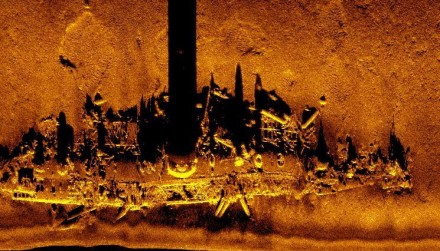 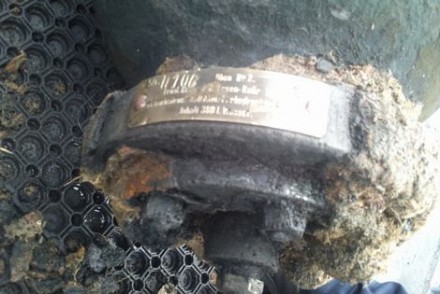 Discovered part of the U 106 which led to the identification of the wreck. Source: MACHU.