In 2020, the recreational wreck-divers Ingo Oppelt and Andreas Raffeck made the wreck public, which they discovered in 2019.

This is the wreck of an - as yet - unidentified submarine of the Seehund-type (literally "seal-type", or XXVII-type) built by Nazi Germany during World War II. It is one of five known examples in German waters and not to be confused with two other Seehund-type submarines also discovered south of Fehmarn in 2000 and 2001 (BSH Nr. 1808 and Nr. 1821). BSH Nr. 1808 was surveyed by archaeological divers in a cooperation between the archaeological state authorities of Schleswig-Holstein and Mecklenburg-Vorpommern in May 1999 with the research vessel SEEFUCHS. At this time the hatchway, the periscope and both torpedos were missing, while parts of the hull were damaged in modern times. Although diesel and oil spillage prevented the divers from entering the wreck, valves, a seat and other parts of the submarine's interior were observed.

Most of the wrecks of this type were later salvaged and broken up, especially in the 1950's and early 1960's (cf. photo below), so this wreck is one of the very few to have survived both the war and the ensuing salvage operations. 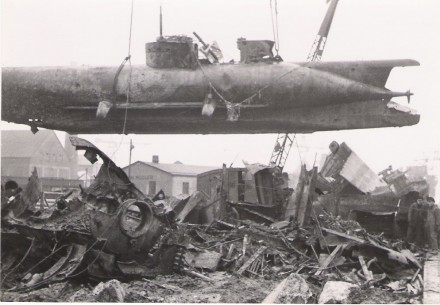 The Seehund-type is the last stage of development of midget submarines of the Kriegsmarine in the closing months of World War II, built between 1944 and 1945 (cf. video below, starting at 7:20).

They were notorious for carbon monoxide poisoning, in which many submariners found an early grave. Salvaged Seehund-type submarines or cross-sections thereof are today on display in several museums, e.g. in the International Maritime Museum (Hamburg), the Bundeswehr Museum of Military History (Dresden), the German Navy Museum (Wilhelmshaven), the Maritime Museum of Kiel, the Musée National de la Marine (Brest, France), and the United States Naval Shipbuilding Museum (Quincy, Massachusetts, U.S.A.).

The naval architect and underwater artist Oleksiy Konovalov has produced a sketch of the wreck based on his dive-impressions: 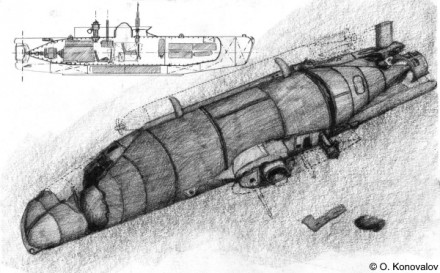 A large gaping hole in the bow section may have resulted from an explosive charge, which was probably placed here intentionally to scuttle the vessel in the final days of World War II. The hole and the hatchway allows a glipse into the wreck's interior, with the engine and commander's seat still visible, but no indications for human remains. Moreover, the vessel did not carry torpedoes, which would have been normally mounted on the vessel's lower sides. 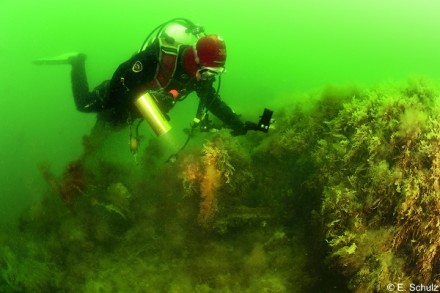 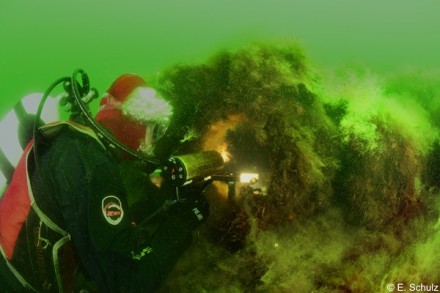 An annotated guided dive-tour is presented in this video: 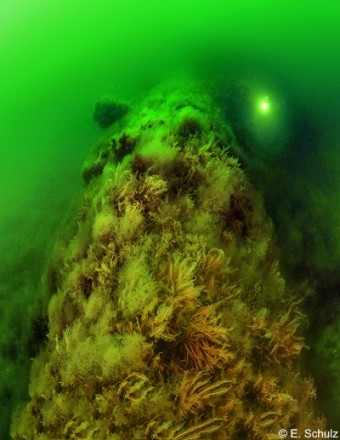 The wreck has been unknown to the Federal Maritime and Hydrographic Agency of Germany (BSH: Bundesamt für Seeschifffahrt und Hydrographie), whichis planning to survey the wrecksite in 2021.