The Buen Jesus y Nuestra Señora de Rosario was just on its way from Havanna to Europe when itr was caught in a huricanne and demised on the Florida keys. The treasure fleet of 1622 met with disaster. The fleet - 28 ships - departed on the 4th of September already late (huricane seizon) from rendevous point Havanna for Spain.

The loss was reported in Havanna and attempted to recover the priceless cargo had some success with the Margarita but the other two ships were unreachable.

The loss of the silver had an immediate impact in Europe. Spanish war efforts in Europe were largely paid by silver from the New world. Spain had to borrow large sums of money inflation rose and the weakness of the Spanish empire became evident.

Already in 1965 shrimp fishers found ship parts and some Spanish amphorae in their nets. The wreck lying on 405 m depth was at that time unreachable. In 1989 the Seahawk Deep Ocean Technology salvage firm discovered the shipwreck again 400 m of Dry Tortugas. 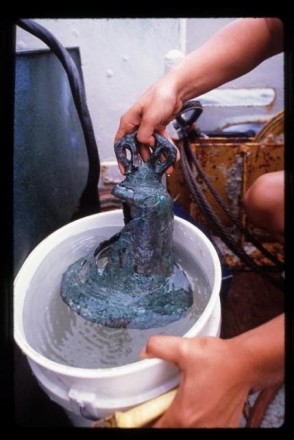 In 1990/91 a deep sea salvage operation was performed on the site by the Seahawk Retriever. Because of the depth everything had to be done with remote ROV equipment.

In the campaigns the robot extracted nearly 17.000 artifacts from the site. The site is aprox. 15 m x 10 m. A ships bell was recovered and Spanish olive jars identifying it as a Spanish ship. 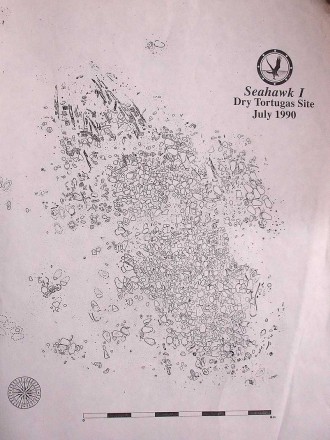 Other finds (pearls) from the site suggest a Venezuelan route and the ship being thus part of the Tierra Firme fleet , pone of the three fleets from the Spanish colonies.

Historical records found confirm the route from Spain to Nueve Corduba. 27 gold bars with Spanish (royal tax) markings were found. Coins and gold bars reveal a date prior to 622, the gold bars resemble finds from the Atocha.

Portugese built merchant ship (naos, urcas, carrack).
Built 1620 as the Buen Jesus y Nuestra Señora de Rosario.
One of the merchant ships of the Tierra Firme treasure fleet bound for Spain laden when it was caught in a hurricane on 6th September 1622. 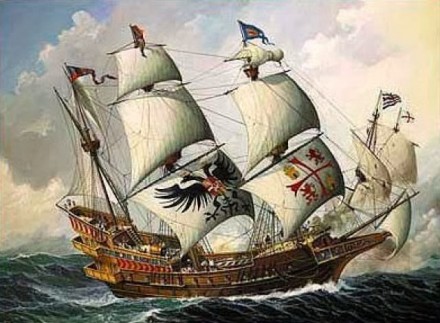