In Tol-Zuid in Tiel, fragments of a ship's hull and a wrangle have been found. The fragments were reused as revetment reinforcements in the port of Tiel around 1015 AD. The planks are from a clinker built ship. There are very few fragment of these ship of Scandinavian type found in Holland. 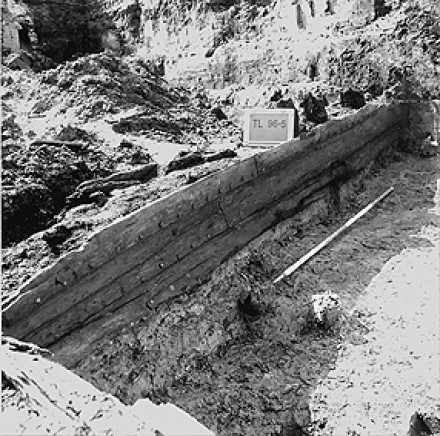 It was built in the Scandinavian tradition, similar to the Skudelev i-wreck (1030).

Based on the samples, the logging date of the wood is between approximately 995 and 1008. One of the dated elements comes from the Ardennes. The remaining wood comes from South West England. This has demonstrated an archaeological link between Tiel and England. Fire traces on the edges of the edges suggest that the original ship was burned out and then scrapped and reused in the port of Tiel.

A Viking attack on Tiel is mentioned by Alpertus van Metz for the year 1006.

Clinker built (also known as lapstrake) is a method of boat building where the edges of strakes or hull planks overlap each other. The technique developed in northern Europe and was successfully used by the Anglo-Saxons and Scandinavians, and typical for the Hanseatic cog. A contrasting method, where plank edges are butted smoothly seam to seam, is known as carvel construction.

The V-shaped frame/wrangel  that form part of the transverse connection of the ship have stepwise indentations on the outside, against which the overlapping strakes of the ship's skin are attached.