In the course of a rescue excavation carried out in spring 2007 on the Beluga Shipping construction site in Bremen, a slab of articulated planking with a fragment of the keel and stem was unearthed within the excavation’s sheet pile wall. It was dubbed ‘Beluga Ship’ in reference to the developer. The wreck was alternatively also referred to as the "Teerhof 2" wreck. It's location is highlighted as Nr. 7 in the overview map below. 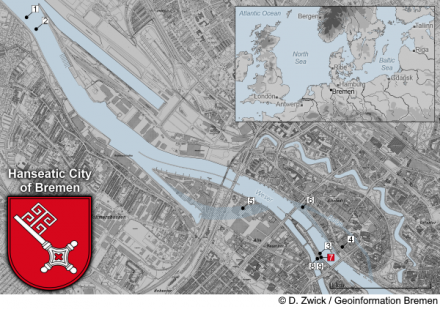 The site of discovery — Teerhof — is situated on a Weser peninsular that literally translates as ‘tar yard’. The yard served the taring of ships during building and maintenance works. Such tar yards are regularly found outside city precincts due to the fire hazard of heating tar, so the peninsular offered optimal conditions. In the wreck's vicinity a slipway was discovered as well, which is also depicted in a woodcut from 1640/41 by Matthäus Merian the Elder (the site of the Beluga Ship is indicated by the red dot). 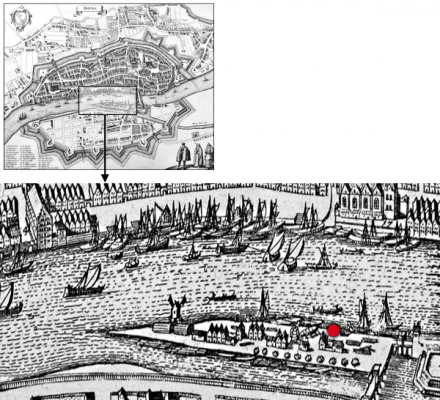 The wreck was documented under the immense time-pressure of a rescue excavation by the offset survey method. The Beluga Shipping company financed the salvage, storage and PEG-conservation of the wreck.

The wreck is preserved to a length of ca. 7 metres and is a late medieval Scandinavian-style clinker construction.

On the port side eight strakes of planking have survived, becoming gradually more fragmented. On the starboard side, only a fragmented garboard plank has survived. The analysed planks have a mean thickness of ca. 2.1 cm and a width of 20 to 26 cm and were clinker-fastened throughout with square-shanked iron rivets. The analysed planks were radially cleft, as indicated already by the narrow plank widths. The lands of the overlapping planks were luted with wool strands.

The treenail rows are regularly spaced at an interval of roughly 50 cm. Each frame had been connected with one treenail per strake. A couple of treenails were missing, probably rebored or driven out to facilitate the removal of the frames. The remaining treenails in place are all stubs. 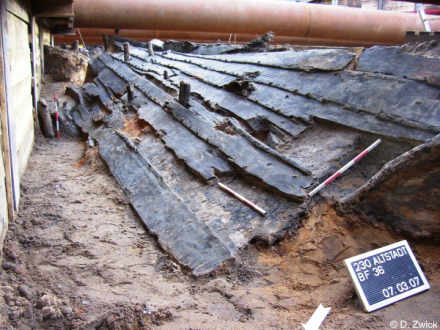 The first dendrological samples taken from the fragmentary upper planks yielded a result from the second quarter of the 15th century with a provenance from the Weser Lowland.

The decision to take further samples from the lowermost and better preserved strakes was rewarded with an unexpected result: The lowermost planks did not only antedate the latter by a few decades, but originated from the Baltic region. This surprising discovery prompted a thorough study, seeking to contextualise the wreck by addressing Baltic timber-trade in this period (cf. Zwick 2019).

The wreck was evidently scrapped at the Teerhof site, and the framing-timber may have been removed for re-use.

After PEG-conservation, the slab of planking was re-assembled in the foyer of the Beluga Shipping company's headquarters, where it is exhibited with other finds from the excavation as permanent loan by the State Archaeology Department of Bremen. In March 2011, the company was declared insolvent, so - ironically - the Beluga wreck survived as only ship-remnant still bearing the company's name.