The so-called Swash Channel Wreck was discovered outside Poole Harbour in a sand and shingle bank that was struck by a dredger in 1990. In 2004, the site was first documented by Wessex Archaeology, during a geophysical survey in advance of dredging to deepen the approach to the harbour. Lying upside-down in approximately 6-9 metres of water with its long axis orientated north-east to south-west, the wreck from the early modern period was found to have survived in fantastic condition. An estimated 40% of the ship construction was found intact, prompting experts to hail the find as the most significant since the Mary Rose. English Heritage now administers the wreck and Bournemouth University are actively investigating the site. 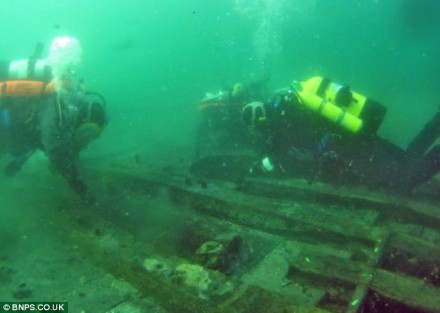 Divers inspecting the timber hull of the wreck (bnps.co.uk).

Despite the wreck's fantastic condition, its identity still remains a mystery. There are however, several clues. Tree-ring analysis of the wood materials of items recovered from the Wreck established a felling date of 1628, and point to the Dutch-German border as the origin of the timber. These results are supported by analysis of the pottery and other objects found at the site, such as apothecary jars, iron cannons, wooden barrels, rigging elements, copper, pewter, bones, ceramic domestic material, leather shoes and musket balls. Based on the evidence, the wreck is thought to have been a Dutch armed merchantman that sank some time during the 1630s.

More clues lie in the constructional features of the ship. Looking at the structure itself and the size of the guns, the ship is thought to have measured over 40 m in length. This would make it one of the largest ships on the seas at the time. The wreck is also adorned with a number of wooden carvings, the oldest examples known in the United Kingdom and could be amongst the oldest of their kind in the world. All this suggests that the vessel was a showcase of prestige and wealth, and likely belonged to a large conglomerate. Since the vessel's outer layer is a sacrificial coating of pine and tar, to be eaten by shipworm found in tropical waters, it can be assumed that the ship was involved in long distance trade. 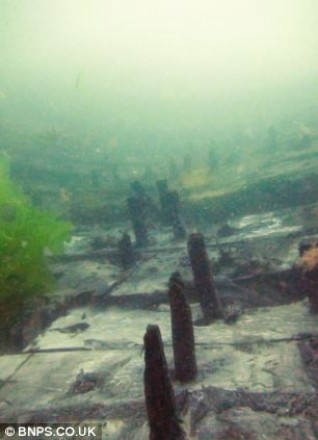 The researchers first assumed that the wreck represents a Dutch East India Company vessel. However, when the company's extensive archives were found to contain no mention of a ship wrecking in this area, attention turned to the Dutch West India Company. As this company's archives have largely been destroyed in the 19th century, and no identifying features have yet been discovered at the wreck site, concrete evidence for or against a link to the WIC remains absent. Even though the Swash Channel Wreck has not been identified, it still contains a wealth of information on the art of 17th century shipbuilding and life on board.

The Swash Channel Wreck has survived in its excellent condition because it was quickly buried by seabed sediments after it sank. However, when the wreck was revealed again by changes in the seabed after some 400 years, it not only attracted the attention of archaeologists but also that of wood-boring worms, and it became exposed to erosion processes. As a result, the Swash Channel Wreck has been rapidly disappearing since.

Despite stabilisation work on the wreck by archaeologists, which has included protecting it with various forms of coverings, it became clear that more drastic measures were necessary. With a Mary Rose-style recovery operation being prohibitively expensive, marine archaeologists from Bournemouth University led efforts to rescue parts of the ship deemed most at risk from degradation.

Thus in 2011, the bowcastle, part of the upper structure of the ship, was raised and 12 metres of the bow followed the next year. The last major piece to be raised was the ship's spectacularly carved 2.5 ton rudder in 2013. Smaller artefacts brought up to the surface included more baroque carvings found on parts of the ship including the gunports, ceramic pieces, leather shoes, copper and pewter plates and cups and a bronze compass divider. Also animal bones of sheep and cows that would have fed the crew were recovered. 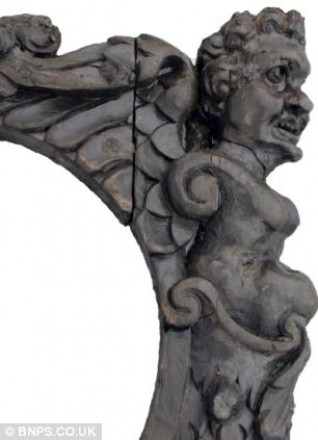 A detailed carving of a merman recovered from the Swash Channel Wreck (bnps.co.uk).

Bournemouth University is currently in the process of analysing the finds and wreck parts. The part of the wreck that remains on the seabed is now covered in sediment and thereby preserved for future generations, thanks to the efforts of the archaeologists. It is one of the 46 sites in the English area of the UK Territorial Sea designated under The Protection of Wrecks Act 1973. 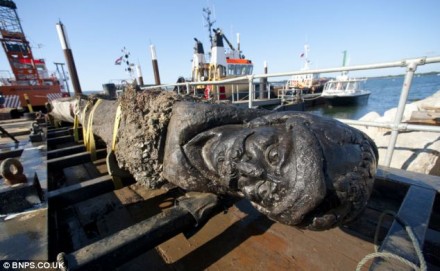 The 8.4 meter long rudder will be constantly sprayed with special chemicals for the next two years to help conserve it, and will then be put on display at Poole Museum alongside other artefacts recovered from the wreckage. 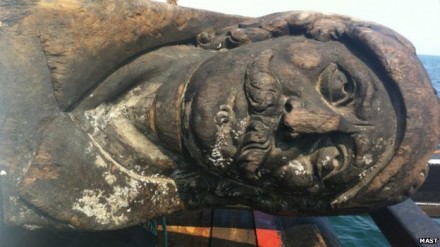 Baroque facial carving on the end of the 8.4 m long rudder shows a moustachioed military man wearing a classical helmet.