The Sutton Hoo ship is the biggest and most complete Anglo-Saxon ship ever found, and is longer than many of the largest modern ocean-going yachts. Ships were very important to the Anglo-Saxons. Rivers and the sea were key to communication and travel.

In many ways, it was easier to go by water than by land, so people in Denmark and the Netherlands would have been the Anglo-Saxons' close neighbors. Recent DNA research has confirmed that Anglo-Saxon immigrants in the UK were genetically very similar to modern Dutch and Danish people. (Current Archaeology, March 2016, issue 312, 6) 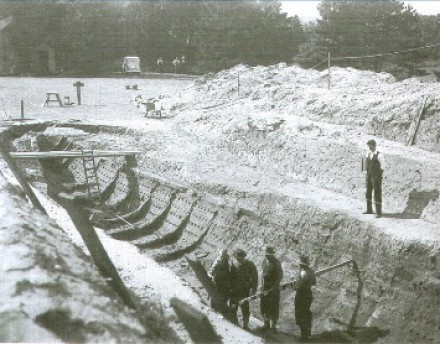 The ship burial is part of a Anglo-Saxon royal burial site with 18 mounds dated to 600-650 near Sutton Hoo, Woodbridge Suffolk. Sutton Hoo belonged to the kingdom of East Anglia in the 7th century.

The ship had been sailed upriver and then dragged overland and then into a pit dug at the burial spot. The ship was then covered with a large mound of soil.

The grave is one of the most magnificent archaeological finds in England. It gives a good picture of the early medieval period in Northern Europe.

The magnificence of the ritual and possessions, the far-reaching connection which they demonstrate, and the inclusion of objects denoting the  personal authority of the individuals buried there, definitely point to a person of the very exceptional status. King Rædwald is a likely – but not the only - candidate.

Rædwald, son of Tytila, was king of East Anglia from ca. 599 until 624 AD. He was baptised probably around 600 by Augustine of Canterbury. But in his temple there were two altars, one dedicated to Christ, and one for dedications to the Anglo-Saxon gods.

In 616 AD war raged against Aethelfrid of Northumbria. Rædwald's son died during battle (battle of river Idle) and Rædwald killed Aethelfrid in combat. Because of this action, Rædwald's authority became sufficiently universal for Bede to recognise him as the most important king in Brittain. Bede calls him Rex Anglorum. 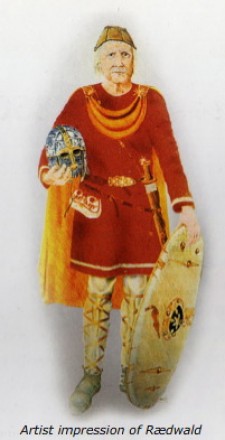 This Anglo-Saxon longboat was reused as a ship burial. The Sutton Hoo ship can be placed technically as in date between the Nydam ship (300-400 AD) and the Viking longboats of the 10th century. It seemed to be an open rowing-boat with 20 oarsmen on either side. There is no evidence of a sailing tackle. But as the mast would be amid ship where the burial chamber was, there is no negative or positive proof for sailing.

Coins give a terminus post quem of ca. 625 AD of the shipburial. Several repair strips on the hull prove that the ship was in use for a considerable time before it was used as burial site. The construction of the ship is dated to 600-610 AD.

The hull seems symmetrically and was constructed clinker-fashion with nine strakes on either side of the keel plank including the gunwale strake. The tapering of planks to bow and stern from an average 2.5 to 10 amid ship. The strakes were made up from several length of planking which were joint together with by small plank-joint rivets. No wood survived but surviving wood grain on the rivet shanks suggests oak.

There is no trace of meginhúfr, a development seen in Viking ships where the waterline plank is thickened and strengthened. 26 wooden frames strengthened the form within, more numerous near the stern where a steering-oar might be attached. The ship has no keel plank. 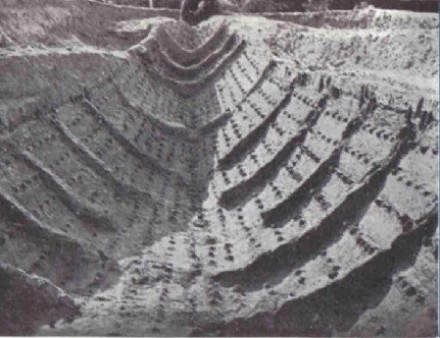 Sutton Hoo. Only an imprint of the ship remains (picture from the excavation in 1939).

The ship burial (Mound 1) is part of a part of an Anglo-Saxon burial of the 7th century near Sutton Hoo, Woodbridge Suffolk. 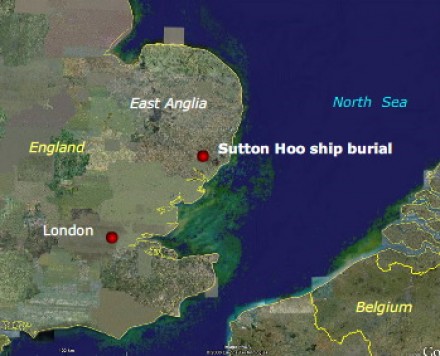 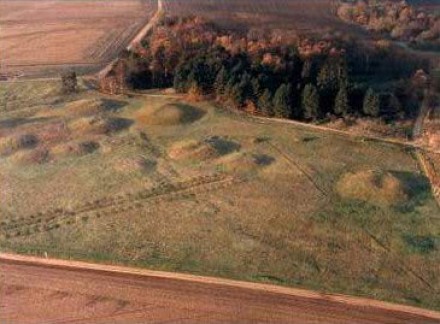 Areal of the cemetery.

In 1939 Basil Brown excavated Mound 1 which was the largest of 18 burial mounds in Sutton Hoo. He discovered a ship burial intact. Although practically none of the original timber survived, the excavation from of the ship in mound 1 presented a very perfect image in 1939. A stain in the sand had replaced the wood but had preserved many details of the construction, and nearly all of the iron planking rivets remained in their original places. Hence it was possible to survey and describe what was merely a ghost of the original ship. 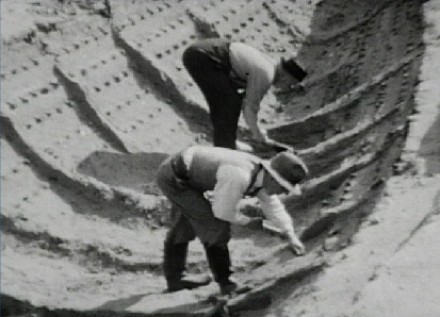 Excavation of '39. Note the perfect image in the sand of the ship.

A re-excavation was performed in the trench and the ship between 1965-67, technical details and better drawings of the boat. Between 1967-1970 the dump from 1939 was excavated. With the result that lots of small finds were made. 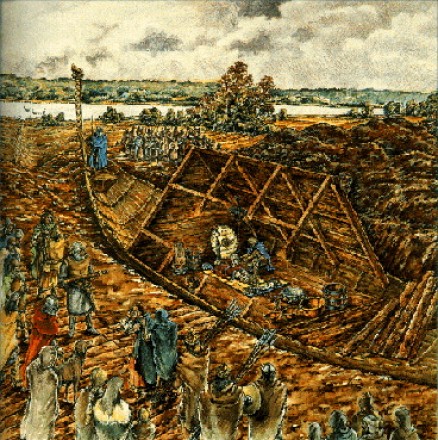 Impression of the burial. 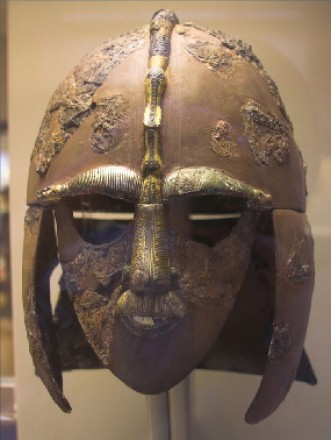 Vendel-type helmet doun in the mound. 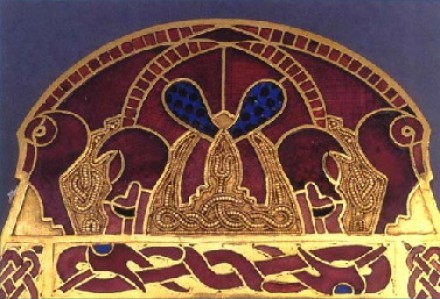