The Middle Stone Age logboats from Stralsund, that were between 8 and 9 meters long, show signs of having a fire place in the aft area. The fire was isolated from the vessel with a layer of sand and clay. At night fishermen can attract fish with the light of torches, and by longer journeys can use the fire of warmth and cooking. The boat was propelled with wooden paddles. In the reedy, peaty shoreline zone were left behnd two dugout canoes from this time period.

And also during the Younger Stone Age, between 4000 and 3500 BC, this area was used for agriicultural and pastoralism as a means of making a living along this beach area. An approximately 12 m long logboat from this time period was likewise found during this excavation.

The stone age dwellers along the banks of Strelasund Channel must have been in close contact with other inhabitants between northern germany, Denmark and soutern sweden. With their similar living conditions, tools and technological developments, this site is condidered in accordance with the Ertebølle-culture. 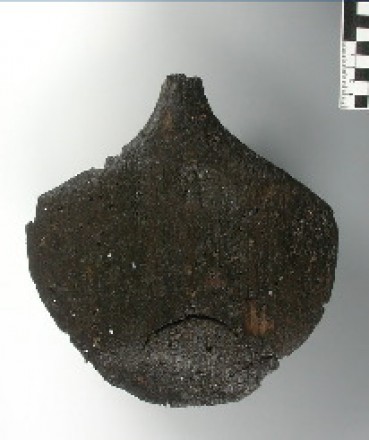 Another name for this type of boat is a dugout canoe.

On the site one logboat was found from the Younger Stone Age (between 4000 - 3500 bce). It was hewn from a large linden tree trunk, which being a soft wood is easily worked with stone axes.

The Younger Stone Age logboat at present is the longest known logboat from the southwest Baltic Sea area (12 m). On the site two logboats were also found from the Middle Stone Age (5000 bce). 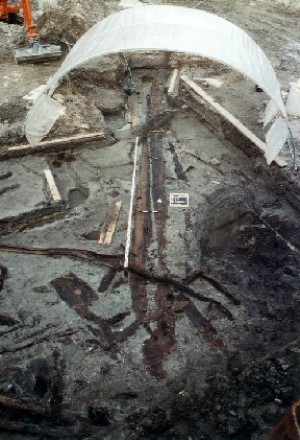 The logboat from Stralsund is broken in many piecesand pressed by the weight of the overlying sediments.(image, G. Schindler and P. Kaute, LKD M_V).