Operated by the United States Mail Steamship Company, the legendary S.S. Central America is launched. Originally named, S.S. George Law. The SS Central America made 43 round trips between New York City and Panama. Each leg of the voyage usually took between 19 to 24 days to complete. The Central America transported an estimated one-third of the entire California Gold Rush output. That one-third was valued at the time at approximately $150 million.

On September 3, 1857: the Central America left Aspinwall (now Colón), Panama carrying 476 passengers, 102 crew members and over three tons of gold. On Friday, September 11, 1857: in the second day of a hurricane the ship sprang a leak at 9 a.m. Passengers were ordered to assist the crew in bailing. Without power, the ship was carried along with the storm, so the strong winds would not abate. The next morning, two ships were spotted, including the brig Marine. 153 people, primarily women and children, managed to make their way over in lifeboats.

The ship sank at about 8 p.m. on Saturday, September 12, drowning a total of 426 passengers and crew, including Captain William Lewis Herndon. 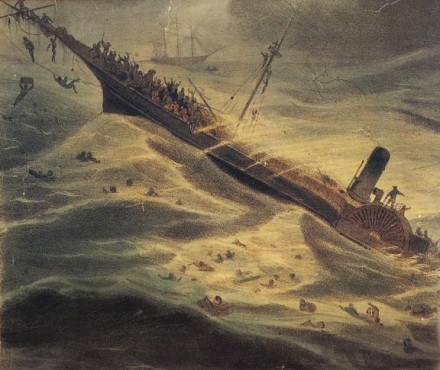 The precious cargo included approximately 5,200 recently-minted $20- denomination ("Double Eagle") gold pieces produced in 1857 at the San Francisco Mint. The gold for these coins was mined during the California Gold Rush. There also was a much smaller quantity of other historic gold coins that circulated in the Wild West.  At the time of her sinking, the Central America carried gold then valued at approximately $2 million USD. The loss shook public confidence in the economy, and contributed to the Panic of 1857.

Part of the Californian gold from the cargo.

The Central America transported an estimated one-third of the entire California Gold Rush output to the East. That one-third was valued at the time at approximately $150 million.

The ship was located by the use of Bayesian search theory and a remotely operated vehicle (ROV) operated by the Columbus-America Discovery Group of Ohio, that was sent down on 11 September 1987.

Significant amounts of gold and artifacts were recovered and brought to the surface by another ROV built specifically for the recovery. Tommy Thompson led the group. Thirty-nine insurance companies filed suit, claiming that because they paid damages for the lost gold, they had the right to it. The team that found it argued that the gold had been abandoned. After a legal battle, 92% of the gold was awarded to the discovery team in 1996. The total value of the recovered gold was estimated at $100-150 million. A recovered gold ingot weighing 80 pounds sold for a record $8 million USD and was recognized as the most valuable piece of currency in the world at that time