Putman's surprise attack
On July 7, 1633, Putmans' squadron entered the mouth of the Chincheu River. There was part of Admiral Zheng Zhilong's newly built fleet for repairs and supplies. Part of this fleet consisted of new ships named Ouboy by Putmans. They were hybrid Chinese junks built in a European manner, armed with (European) heavy cannons. (Dagregister). The Chinese ships partly on the dry land were unmanned and were quickly destroyed.

Putmans blocked the bay. No junk could get in or out. For example, he would force the Chinese authorities to make concessions. Zheng Zhilong's fleet was partly destroyed but certainly not all. What Putmans didn't know was that Admiral Zheng was far away with most of his new fleet. He was on a punitive expedition against pirates in the north.

Putman's base of operations was the Liaoluo Bay behind the islet of Kinmen. His squadron consisted of the yachts: Broekerhaven, Sloterdijk, Wieringen, Bredamme, Zeeburg, Koudekerke, Zalm and Bleiswijk. 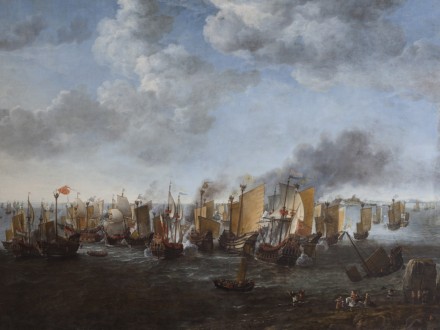 This painting by Simon de Vlieger (dated 1650) depicts a fictional battle between Dutch ships and Chinese junks that took place on 13 July 1633. In the painting The Texel, Arnemuiden and Domburg are fighting with Chinese. In reality, many Chinese junks were destroyed in this action. The Chinese ships were unmanned at that time. 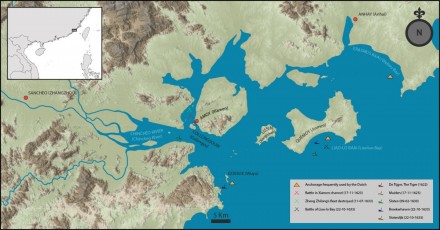 Battle of Liaoluo Bay
Early in the morning on October 22, 50 large and 100 smaller junks filled with combustible material came into view. Putman's squadron was anchored in Liao lo Wan bay south of Kinmen Island. His allied Chinese pirates about 40 junks immediately lifted the anchor and took off.

The Dutch lay there, relying on their artillery. The Chinese, on the other hand, had no intention of letting it come to an artillery fight and were on a collision course. Putmans realized too late that each and every one of them were fireships approaching him. The Chinese boarded and once attached to a Dutch ship, they set fire to their own ships with real contempt for death. The Broekerhaven and Sloterdijk were lost. Putman had to give up the blockade and retreat to Tayuan.

The VOC then gave up its efforts to gain a foothold on the Chinese mainland. In the coming decades Fort Zeelandia on Tayoean became the VOC hub in the Far East.