SE-510, otherwise known as Lost Anchors, is oriented southwest – northeast at a heading of 39 degrees and measures 900 meters long and between 3 and 10 meters wide. Its 350-meter-long central area consists of a high reef structure that protrudes between 3 and 4 meters from the 25-meter-deep sandy bottom surrounding it. The outcrop, covered by a dense reef, forms an impressive structure on an otherwise sandy sea floor, with large chunks of rocks about to slide off the top. It contains many cracks in which anchors could easily get stuck. Because of its dramatic topography, it attracts large quantities of fish and is overgrown by a variety of corals and sponges. 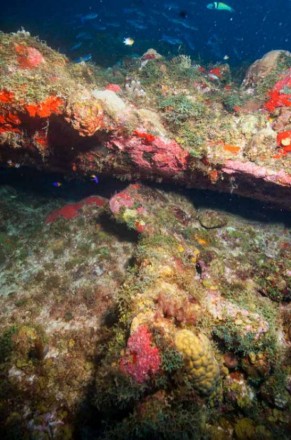 An anchor piece found inside the reef of SE-510 at 22 meters deep. Of this anchor only one arm remains. The anchor got stuck underneath the ledge in the center of the image. The force of the ship pulling on the anchor caused this arm to break off. Photo by Mike Harterink.

SE-510 is located in the central area of the historic roadstead of St. Eustatius. Here in the eighteenth-century, thousands of ships dropped anchor in order to trade at this free port. An investigation was carried out at the site in 2015 by the St. Eustatius Center for Archaeological Research in which three anchors and three anchor fragments were recorded. These anchors will further on be referenced by number (see bottom image). Six anchors were found to be associated with this reef: two intact anchors on top of the reef (numbers 25 and 28), one intact but heavily overgrown anchor immediately next to the reef (number 26), and three anchor pieces embedded in the reef (numbers 27, 29, and 30). 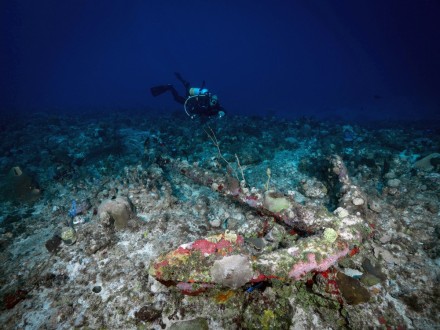 A diver exploring an eighteenth-century anchor lost at SE-510. Photo by Ruud Stelten.

The intact anchors were all missing their wooden stocks which have decayed over the years. The absence of iron stocks provides a terminus ante quem of mid-nineteenth century for these anchors. Anchor 25 is of English manufacture, while anchor 28 was made in France. Four anchors were found on top of the reef, but anchors 26 and 30 are stuck in the reef from the southern side, indicating that ships mainly anchored to the south of the reef. This is to be expected, since the area to the south of the reef is very sandy, while the area to the north consists mainly of rocks and is therefore unsuitable for anchoring. As the size of the site made it impractical to map by hand, a side scan sonar survey was conducted to visualize the reef’s central part (see image below). 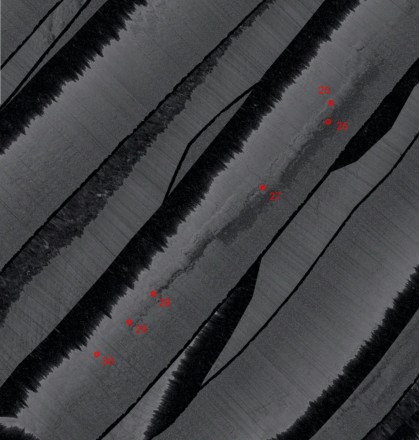 Side scan sonar mosaic of the central, elevated part of SE-510. The higher parts of the reef produce acoustic shadows which provide an indication of relative height above the sea floor. The distance between anchors 25 and 30 is 320 meters. The reef is oriented northeast-southwest. Anchor 30 marks the southwestern tip of the site. Photo by Ruud Stelten.