During the eighteenth-century, St. Eustatius’ free port caused thousands of ships to drop anchor in the now historic roadstead. Today, ship and artifact remains from this busy era litter the sea floor. In order to fully understand St. Eustatius shipwrecks, one must first understand an important part of their cargo, the blue bead. Large amounts of blue glass beads have been found not only on St. Eustatius but throughout colonial-period archaeological sites in the Atlantic World. Among their many uses and meanings, these beads were often traded for enslaved people in West Africa.

Plain blue seems to have been the preferred bead color in the Caribbean. On St. Eustatius, one particular type of blue glass bead predominates. It was classified as the WIIf*(d) type by Karklins and Barka in 1989 (Karklins & Barka 1989). Beads of this type are dark blue and pentagonal in cross-section. Made in Amsterdam by Venetian glassblowers as early at the first half of the seventeenth century, they are of the wound bead type, made by winding a strand of molten glass around a rotating metal mandrel until the desired size and shape were achieved (Karklins 1974:67). 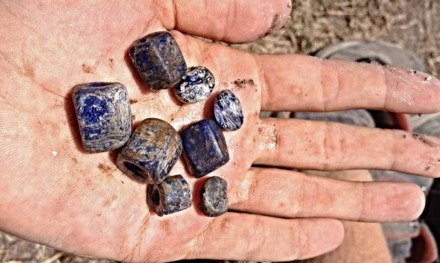 Blue beads of the WIIf*(d) type. The beads were found in a hoard during an archaeological excavation by the St. Eustatius Center for Archaeological Research north of the Old Gin House hotel in Lower Town in 2013. Photo by Ruud Stelten.

While beads of the WIIf*(d) type have also been found on colonial-period Amerindian sites in North America and slave trading posts in West Africa, nowhere are they present in such large quantities as on St. Eustatius. During the 1981-1987 field seasons on St. Eustatius, archaeologists from the College of William and Mary recovered 325 beads from various terrestrial excavations, 25 percent of which were beads of the WIIf*(d) type. These beads are found all over the island, but particularly on the beach in Gallows Bay. This suggest that this particular type was either especially popular with the local population or that Statia was a major distribution point for them (Karklins & Barka 1989:67). It is said that these ‘Statia blue beads’ were used as a type of currency by the enslaved population and were worn as body ornaments on necks, arms, and legs. Bead use among enslaved people throughout the Caribbean seems to have been widespread according to many historical sources (Karklins & Barka 1989:75). They were acquired by trading, stealing, or as gifts. One local legend has it that when enslaved people on Statia were emancipated on July 1, 1863, they stood on the edge of the cliffs and threw their beads into the sea as a sign of their freedom.

In 1907, Frederick A. Fenger sailed from Grenada to St. Thomas in a 5.2 meter long canoe, stopping on many islands along the way, including St. Eustatius. He published the book Alone in the Caribbean, describing his adventures and providing information about St. Eustatius. Fenger described a shipwreck containing thousands of blue beads which also happens to be at a popular dive site called Blue Bead Hole, located a few hundred meters west of the harbor in Gallows Bay. Here, divers often find blue beads of the WIIf*(d) type which they can take home as souvenirs. Over the last three decades, thousands of blue beads have been found in this area. They are usually found after heavy swells which cause the sandy bottom to stir up, thereby exposing beads that were previously buried. The area where the blue beads are found is a few hundred meters across, but most are found in a very small area that contains a large concentration of beads. It is in this small area where the ship described by Fenger must have sunk. The loss of a cargo of blue beads is the only logical explanation for their abundance in this area, as the legend whereby former enslaved people threw their beads into the sea at emancipation does not account for the large numbers of beads that are found here. Moreover, the former enslaved people could not have thrown their beads that far into the sea, as the site is located several hundred meters from shore. In this case, an oral historical account of the island’s inhabitants about the wrecking of a ship told to and written down by Fenger provides an explanation for the presence of large numbers of blue beads in this area.

Blue Bead Hole consists of a sandy bottom, ranging from 15 to 17 meters deep. Despite the fact that many – undoubtedly the most intact and most visually appealing – artifacts have been looted from this site over the past 30 years, an abundance of artifacts besides the famed blue beads is still found here, including ceramics fragments, glass bottle fragments, ballast bricks, and metal artifacts. There is said to be a swivel gun present at the deeper part of the site as well, but it was not found during a survey conducted in 2015 by the St. Eustatius Center for Archaeological Research. The site is also covered in ballast stones, indicating that many ships anchored in this area. The ballast stones are scattered across the site, with concentrations at various locations. One of the largest concentrations is located near the center of the site, where most blue beads have been found. The stones appear in small piles across the sandy bottom, some of which are up to eight meters long and half a meter high. It is possible that some of these larger piles may be the remains of shipwrecks instead of ballast that was thrown overboard, but this is impossible to determine without excavating underneath the structures. It could be that only the tops of these piles are visible, as the depth of the site can be reduced or increased by several meters due to erosion and sedimentation of sand caused by storms. Despite the fact that many artifacts and ballast stones were encountered, it was impossible to link any of these, except for the blue beads, to the Blue Bead Wreck. The concentration of blue beads, which marks the (approximate) location where the ship sank, was named SE-506. 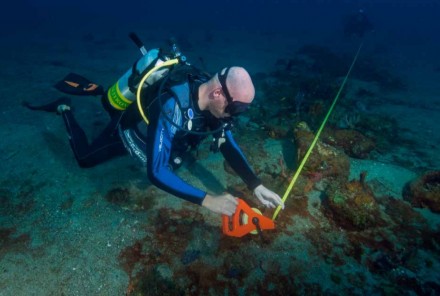 Divers measuring ballast piles at Blue Bead Hole. Next to this 8-meter-long pile, an elongated, completely encrusted metal artifact was found that is thought to be a musket. Photo by Mike Harterink.

It is interesting to note that the cargo of blue beads ended up on St. Eustatius in the first place. As the examples above demonstrate, slave trade beads were mainly used to purchase enslaved in West Africa, but they remained part of ships’ cargoes in the New World. The fact that such large quantities are now found on Statia indicates that the ship carrying them may have been involved in the slave trade and had the intention of trading the beads in West Africa at a later date. This is mentioned by Fenger as well, who heard this story from people on the island. It may also be that these beads, which are all the same type, were shipped to Statia specifically because they were so commonly used by the island’s (enslaved) population. Considering the fact that the cargo was of such homogenous nature, particularly compared to that of the Bermudian debris site, this is a plausible scenario. Whatever the reason is for their presence on Statia, the large numbers of beads found on the sites discussed above indicates that there may still be thousands of beads left on the Blue Bead Wreck site.