SE-504 is located 800 meters from shore in Oranje Bay on St. Eustatius’ leeward side. The site is between 18 and 19 meters deep and is bordered by an elongated coral reef on its southwestern side and a sandy sea floor on all other sides. The site itself is relatively flat, resting mostly on a sea floor composed of rocks and sand with the exception of several rocky outcrops in the northern and central parts. The reef and rocky outcrops are overgrown with a variety of corals and sponges. The visible part of the site is 61 meters long and 13.5 meters wide, and oriented roughly north-south.

The SE-504 wreck site is known among recreational divers as part of the Triple Wreck dive site. Previous research was conducted by the College of William & Mary in 1986 and later in 1987 and 1988 by East Carolina University. Investigations did not include test excavations due to time constraints. A broken anchor was found on the southeastern part of the site, with part of the shank and one arm visible and the other arm embedded in the ballast pile. While investigating the anchor, the researchers removed pieces of wood, bricks, and rocks, and found a small intact rice bowl beneath the anchor. It is believed that the anchor became hooked on the wreckage and had to be cut free, indicating that it postdates the wreck. These researchers concluded that the SE-504 site consisted of a ballast pile in the shape of a ship’s hull and a small area of ballast scatter on the eastern side, which was later refuted by further investigations between 2018 and 2020. 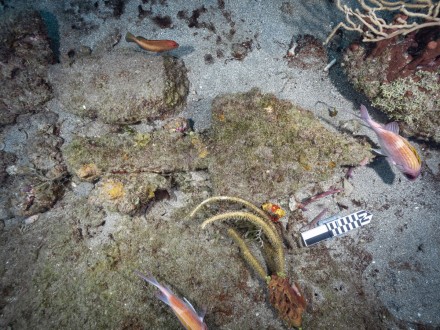 An arm and fluke of an anchor located in the northwestern area of the SE-504. Photo by Ruud Stelten.

In September 2017, hurricanes Irma and Maria wreaked havoc throughout the Caribbean. While St. Eustatius was largely spared with relatively little damage, the two storms generated rough sea conditions around the island which caused major shifting of sand on the sea floor. This revealed a previously unknown historic shipwreck site close to the Triple Wreck dive site in Oranje Bay. The Shipwreck Survey student field school was held on this shipwreck site three times, in January 2018, January 2019, and January 2020. During the field schools, all archaeological remains visible on the sea floor were mapped and documented in detail, revealing a dense concentration of artifacts that shed light on the nature of the wreck, its age, and shipboard life.

The artifacts documented were separated into categories based on their type. First, one of the most common type of artifact at this site was ballast. Ballast refers to any material placed in the bottommost portion of a ship to lower its center of gravity in order to improve ship handling and sailing balance. This material was most commonly building materials, such as floor tiles, roof tiles, and especially bricks. The demand for these building materials in overseas colonies like St. Eustatius caused some vessels to allocate a significant amount of cargo space for it. One other artifact that is interpreted as being part of the ship’s ballast, besides the abundant yellow bricks, is an anchor piece located in the northern central area of the site. 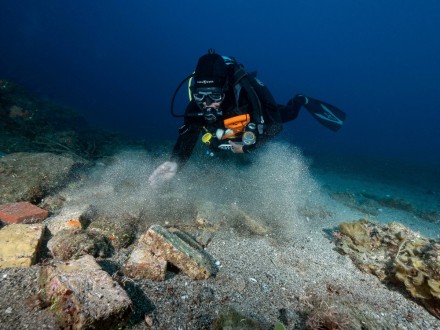 A diver fanning artifacts on the SE-504 site in order to gain a clearer view of a pile of ballast bricks. Photo by Ruud Stelten.

Various types of metal artifacts were also encountered on the site. Most numerous are heavily concreted ferrous objects (n=75), most of which are interpreted as fittings and fasteners such as nails and spikes used in the construction of the vessel’s hull. At least five concreted metal objects on the site are interpreted as barrel hoops or barrel hoop fragments, but there may be more fragments present that were not interpreted as such. The wooden barrels these hoops were originally part of may have held supplies such as food and water, but they could have also been used to transport Caribbean produce such as sugar and rum. Other metal artifacts found and recovered are comprised of crew items, including a pewter spoon, pewter plate, and two shoe buckles, which were all widely used on ships in the colonial period. Of particular interest is a copper-alloy half ankle shackle found in the central part of the site. Possible uses for this object include restricting the movement of misbehaving sailors or enslaved people, though without further evidence the actual use is unknown. 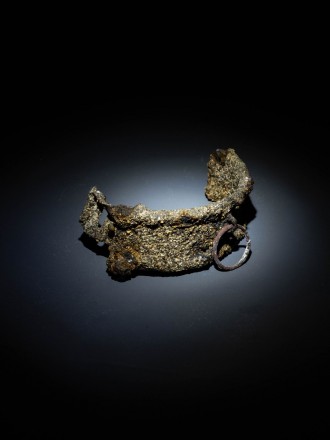 Half of an ankle shackle retrieved during the January 2018 season for The Shipwreck Survey field school at SE-504. Photo by Ruud Stelten.

Glass is represented mostly by bottle fragments that are scattered throughout the site. Two intact Dutch onion bottles were found, recovered, and properly conserved. Three fragments of stemware were found in the northern part of the site. One wound pentagonal blue glass bead, also known as a ‘Statia blue bead’, was found in the western part of the site. Blue beads, produced by Venetian glassblowers in Amsterdam, are dark blue and pentagonal in cross-section. Large amounts of blue glass beads have been found not only on St. Eustatius but throughout colonial-period archaeological sites in the Atlantic World. They held many uses, meanings, and were also often traded for enslaved people in West Africa. 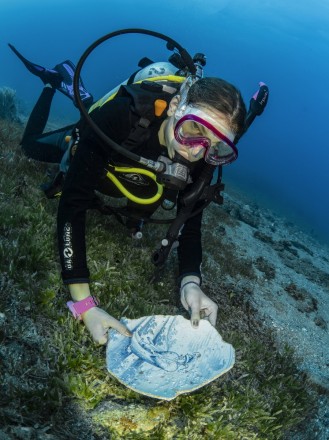 SE-504 is interpreted as a shipwreck site. Several lines of evidence point to this. First, had the site been a random collection of artifacts thrown overboard from ships in the roadstead over time, the assemblage would have been much more varied. Most importantly, given the fact that the island’s economy reached its zenith in the 1770s and 1780s and most ships called at the island at this time, there would have been an abundance of late eighteenth-century white-bodied earthenwares in the site’s assemblage. The fact that no late eighteenth-century white-bodied earthenwares are present in the assemblage strongly suggests that the site was covered by a layer of sand shortly after it was formed, thereby preventing the intrusion of later artifacts. Moreover, the date range of several artifacts in the assemblage is very narrow, suggesting a mid-eighteenth-century date for the time of wrecking. Second, the site contains several indicators of a shipwreck site. The site consists of at least 302 yellow bricks used as ballast inside the hold of ships. There is also an abundance of metal fragments present on the site. Most of these are interpreted as nails and fasteners that held the wooden hull of the ship together.

The latest research has indicated that the 61-meter-long structure at SE-504, interpreted as a ballast pile by previous researchers in the 1980s, is almost certainly not a ballast pile. The main concentration of ballast, in the form of bricks, tiles, an anchor piece, and possibly stones, is located northeast of this structure. This is where artifact density is the highest. Artifact and brick density around the 61-meter-long structure is very low. It is therefore highly likely that this previously determined ballast structure is simply a natural rocky outcrop on the sandy bottom.

Twenty-eight recovered artifacts provide useful date ranges. Three other dateable artifacts are considered to be intrusive artifacts arriving through different site formation processes and therefore not to be part of the site’s assemblage. The range determined from the dateable artifacts is 1740-1760, which is the time period during which the ship most likely wrecked.

The area where the vessel sank provides no navigational hazards; the water depth is between 18 and 19 meters and there are no shallow reefs or shoals in the immediate vicinity. Moreover, there are no known naval battles around St. Eustatius in the mid-eighteenth century. The most likely reason for sinking is therefore a hurricane. Throughout the colonial period, the island suffered many devastating hurricanes. Historical records indicate that dozens of vessels foundered around the island during violent storms in the eighteenth century (Stelten 2019:71). During a hurricane in 1747, it was reported that 68 out of 74 ships at anchor at St. Eustatius sank (The London Magazine 1747). Considering the date range of the analyzed artifacts, it is very likely that the ship at SE-504 sank during this hurricane. 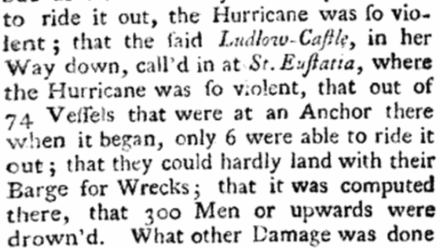 Site formation processes affect shipwrecks in many different ways. The SE-504 site is no exception to this. The most obvious example is the degradation of most, if not all, wooden components of the vessel by the shipworm (Teredo navalis). The resulting disintegration of the vessel caused many artifacts to be scattered across the site. The absence of late eighteenth- and nineteenth-century material culture on the site indicates that shortly after the vessel sank and disintegrated, it was covered by a layer of sediment. Hurricanes Irma and Maria removed this sediment and thereby exposed the site. The water movement caused by the hurricanes undoubtedly also moved artifacts around. 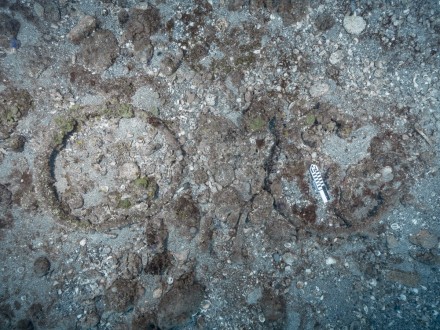 One complete (left) and fragmented barrel hoop (right) located in the northeastern area of SE-504. Photo by Ruud Stelten.

The visible part of the site is now completely mapped and documented in detail. It is likely that many more remains, which may even include organic materials such as parts of the ship’s hull, are present underneath the sediment and the visible part of the site. Future extreme weather events may move more sand and expose more of the site. SE-504 will continue to be monitored in the hopes of a greater percentage of the shipwreck of being revealed and excavations may also occur in the future.