SE-502, located 600 meters from shore, used to be a popular dive site called Stingray City. The site is 40 meters long, 12 meters wide, and oriented in a north-south direction along its main axis. The site is located on a sandy bottom at a depth of 16 meters and consists of one large ballast pile which gradually slopes into the sand on the western side. The ballast stones are completely overgrown with a variety of sponges and corals and inhabited by large numbers of fish and invertebrates. 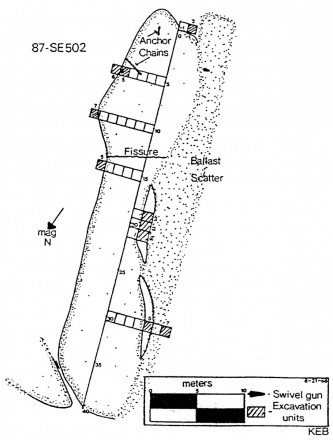 The first investigation at this site was conducted between 1987 and 1988 by East Carolina University. Those investigators believed that the southern end of the site was the ship’s bow due to its rather pointy shape. Near the bow, two anchor chains were documented, one of which went into the structure on both ends of the chain. Other artifacts that had been seen laying on top of the ballast structure two years prior to the investigation included a ship’s bell, muskets, and swords. These objects were reported to have been looted, as they were not present when archaeologists studied the site. According to a former dive shop owner, these artifacts were taken to Australia by a treasure hunter. On the starboard bow side of the site, an 85-centimeter-long swivel gun was found among the ballast stones. 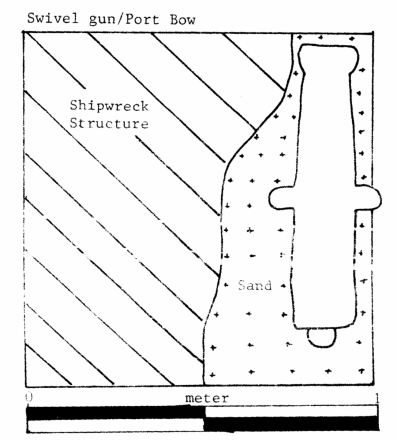 Ten 1 x 2 meter test trenches were excavated during the above mentioned investigations, situated along the starboard and port sides. These yielded numerous artifacts, ranging from the ship’s cargo and tools to personal items of the crew. On the port side, two wooden plank fragments were excavated that were thoroughly eaten by shipworm (Teredo navalis) and a second swivel gun was found near the bow of the ship, at a depth of 30 centimeters. The forward section of the vessel contained several metal and wooden tools, indicating that this area may have housed the ship’s stores. Many red and yellow bricks, as well as multiple pieces of slate, were uncovered in the southern and central area indicating that these may have been transported in the hull as ballast. Several pieces of charred wood were found in the center of the ship, which could be evidence of a burnt ship or they could have been from the galley stove. Among the other artifacts collected from the test trenches were many fragments of glass, ceramics, and clay tobacco pipes, cutlery handles, musket balls, fragments of wood, guns, leather objects, multiple pieces of iron, and a glass lens that may have been part of a telescope. Based mainly on the clay tobacco pipe fragments and the ceramic assemblage recovered from the test trenches, the researchers believed this ship dates to the mid-eighteenth century and is of Dutch origin. The wreckage was believed to be that of a merchant vessel due to the large amount of ballast encountered (Bequette 1992:137). 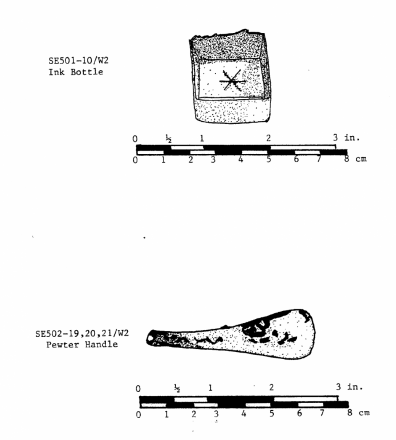 Drawing of artifacts found at SE-502. Top artifact is a sketch of an ink bottle fragment and bottom of a pewter handle. Source: Bequette 1992. 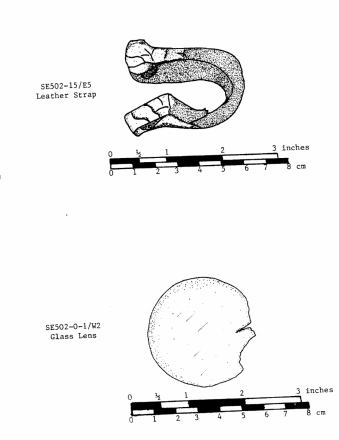 Drawing of artifacts found at SE-502. Top artifact is a sketch of a leather strap and the bottom of a glass lens. Source: Bequette 1992.