The Schiedam was originally named De Grote Schiedam of Hoorn.

In 1683 the Schiedam collected a cargo of timber from Northern Spain and continued her voyage round Portugal and past Gibraltar. On 1st August the vessel was captured by Moorish pirates from Salé in Morocco. The crew was transferred to the pirate ship and the Schiedam was sent to Salé.

Ten days later the vessel was captured by an English galley frigate The James. The pirates were transferred to the James as oar slaves, and the Schiedam was taken to Cadiz where the cargo was sold. Four days later another English ship chased and ran a ground a Salé frigate, which turned out to be the same frigate that had originally captured the Schiedam.

Twelve of the remaining Dutch prisoners, originally from the Schiedam, were rescued. English warship engages pirates, An action between an English two-decker and a Barbary two-decker, showing three small ships and four galleys. 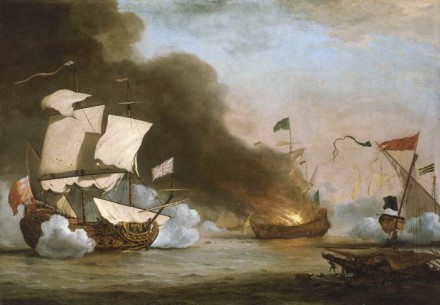 Pirates of Salé and the Barbary Coast

The Barbary Corsairs, sometimes called Ottoman Corsairs or Barbary Pirates, were pirates and privateers who operated from North Africa, based primarily in the ports of Tunis, Tripoli and Algiers. This area was known in Europe as the Barbary Coast. Similar raids were undertaken from Salé and other ports in Morocco, but strictly speaking Morocco, which never came under Ottoman dominance, was not one of the Barbary States. Pirates captured thousands of ships, and long stretches of coast in Spain and Italy were almost completely abandoned by their inhabitants. From the 16th to 19th century, pirates captured an estimated 1.25 million people as slaves. The scope of corsair activity began to diminish in the latter part of the 17th century, as the more powerful European navies started to compel the Barbary States to make peace and cease attacking their shipping. However,the ships and coasts of Christian states without such effective protection continued to suffer until the early 19th century.

Dutch Fluyt (Noordvaerder) built for the timber trade with Norway. Medium sized flyboat, ca 200 last (ca. 400 tons).
A Fluyt was a cheap design which required only ca. 30 crew to sail them. The narrow decks had a considerable tax advantage but allowed little space for armament, for example the Schiedam only carried four guns.
The ship on the left depicted by Reinier Nooms is a Noordvaerder. Usualy Noordvaerders were not armed. They were designed to carry timber from Norway. The Schiedam was of this type. The ship on the right is an Oostvaerder lightly armed. 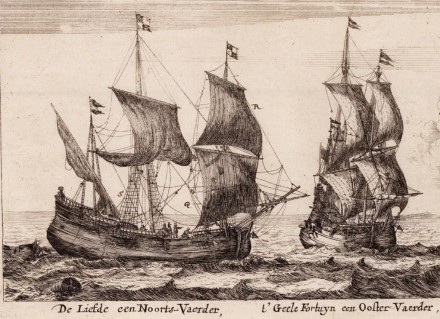 Fluyt ships that traded in the Mediterranean were more heavily armed. On this picture made ca. 1640, the left ship is the Hasewind, a Spaansvaerder. The ship on the right is De Vryheyt (a frigate) a warship of the Dutch Republic. 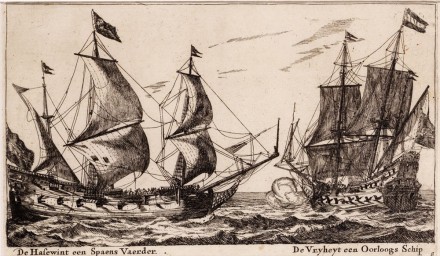 Designated sites are identified as being likely to contain the remains of a vessel, or its contents, which are of historical, artistic or archaeological importance. The site has since been excavated and monitored over a number of years, from the time of its discovery in 1971 up to the present day. The site is centred on the cannons, which lie in an area of rocky seabed close to the shore. 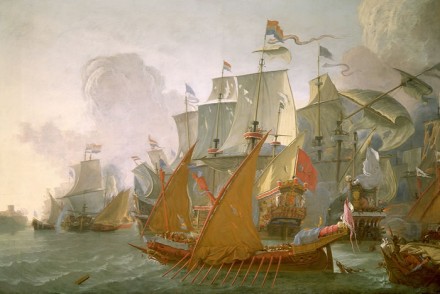