The Salcombe Cannon Wreck was located in the early 1990's by the licensees of the Erme Estuary andErme ingot sites who noted the presence of cannon in gullies cut into the seabed at Prawle Point, Devon. In 1994 the South West Marine Archaeology Group (SWMAG) team dived on the cannon site and unexpectedly found a number of exposed gold items.

In 2004, an assemblage of unusually well preserved Bronze Age artefacts were discovered when the team were attempting to determine the limits of the cannon site. These finds were also excavated due to their vulnerable nature and passed on to the British Museum.

The gold recovered from the wreck is now on display in the British Museum (Source: swmag.org).

Only one hull fragment of the 17th century ship has been discovered to date, although there are sandy pockets in the gullies where more fragments may remain undiscovered. The majority of the remains of the wreck is formed by cast iron cannon and swivel guns, the cargo and anchors lying at a depth of around 3 meters. Ceramics found at the site were of Dutch, Portuguese and German origin, dating from 1580 to 1650. Some other finds included Dutch a pewter bowl and spoons from the same period.

Some of the artefact's raised from the wreck are now in the British Museum (Source: swmag.org).

The most striking feature of the wreck is the assemblage of Islamic gold coins and jewelery the largest ever found in the United Kingdom. Upon discovery most if not all of these have been recovered due to the risk of visits by treasure hunters and for research purposes. Analysis of the coins by Venetia Porter of the British Museum has indicated a Moroccan origin, with Marrakech as the dominant mint mainly dating to the rulers Ahmad al-Mansur (1578-1603) and his son Zaydan(1608-27). The two latest coins, which provide a terminus postquem for the site, are from the reign of al-Walid (1631-6). The jewelery, probably of Moroccan origin as well, included gold earrings and pendants and gold finger ingots. Much of the gold had been deliberately cut suggesting that it was being traded as a bullion hoard. The collection currently resides at the British Museum. 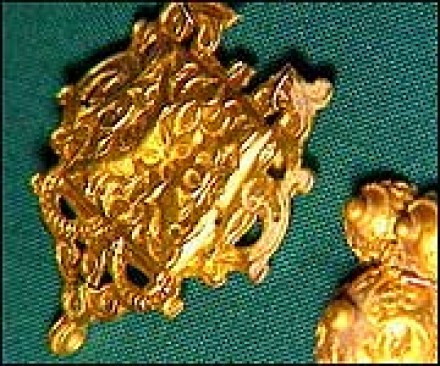 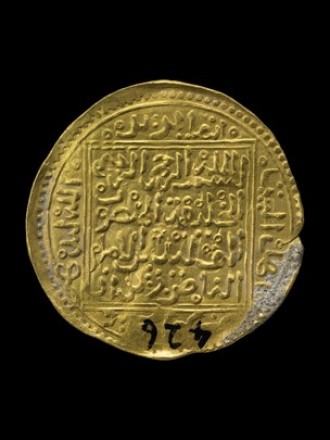 The youngest coin recovered from the wreck dated to the reign of Muhammad al-Walid, 1631-1633, thus providing a terminus post quem for the dating of the shipwreck (source: British Museum).

Although there are many documented losses in the area of the Salcombe Cannon Wreck, its identity and origin remains unconfirmed. The unusual finds seem to indicate a cargo of North African origin, however, the shipboard items are consistent with an origin in the Low Countries, probably Holland. This may provide evidence of trade connections with North Africa via the Low countries or even represent a unique example of an Islamic merchant ship. 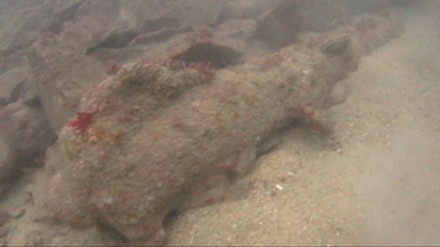 A cannon at the Salcombe Cannon wreck site (Source: swmag.org).

The site was designated by English Heritage as an archaeological monument in 1997 and the artefacts were handed over to the British museum for investigation. The less vulnerable cannon and anchors remain on the seabed, where the site is monitored on a regular basis.