Rooswijk was built in 1737 by the VOC chamber of Amsterdam, and made one successful voyage to the Dutch holdings in Asia and back to the Netherlands, and wrecked on her second outbound voyage to the Dutch East Indies on January 9, 1740, one day after departing from Texel in the Netherlands. Rooswijk was carrying a cargo of specie intended for trade in Asia, and ran aground during a storm on the Goodwin Sands, a sandbar off the coast of England, and sank with her entire crew.

The loss of Rooswijk was reported in contemporary newspapers. On January 8, the Sherborne Mercury/Weekly Advertiser stated: "Yesterday came advice, that a Dutch ship bound for Batavia, was lost on the Goodwin Sands, with all the Ship's Crew, being upwards of two hundred Men."

Documentary 'Het geheim van de Rooswijk' ('The secret of the Rooswijk') by WNL. Only in Dutch. 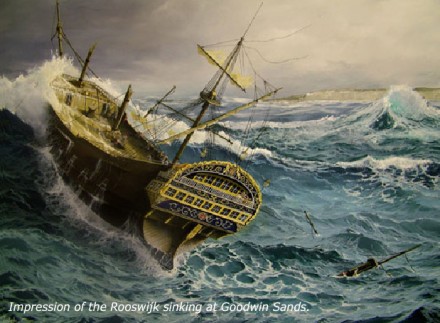 Impression of the Rooswijk sinking at Goodwin Sands.

Part of the cargo of Rooswijk consisted of 30 boxes of silver bars and Mexican coins with a value of fl.300,082. Part of the recovered cargo was handed over to Dutch authorities, while another part was sold for commercial purposes.

Several hundred Mexican silver cobs from the 1720s and early 1730s, as well as transitional ‘klippes’ from 1733-1734, as well as many more hundreds of ‘pillar dollars’ and a few cobs from other mints have entered the market from this wreck site, mostly through auctions.

The depicted coins are Mexican mint, Klippes Recortados dated to 1733, openly on sale for $1250 on the internet.

For more 3D-models of finds of the Rooswijk, check out our Sketchfab page: Maritime Heritage

The wreck site of Rooswijk was first located in 2004 by amateur divers, and part of the cargo recovered in 2005 by professional salvage diver Rex Cowen.

An assessment in 2006 showed that the wreck site consists of two main areas of wreckage, and that the site has a combination of many different high-quality surviving features. In the stern area, a number of timber structural elements of the hull and interior framework were recorded, with most being in remarkably good condition. A number of large concretions and groups of iron bars were also identified, and in many cases these features were recorded as located on areas of timber. The quantity and condition of materials recovered from the wreck of Rooswijk indicate that large sections of the wreck are buried and preserved to a high degree.

In 2016 an expedition took place to gain a better understanding of the Rooswijk wreck site, the ship’s design and the state of preservation of the materials on the seabed in situ. The 2016 expedition was filmed by Kai Dieho. You can see how the team members carry out the survey, working underwater and talking about the importance of the wreck site and the history of the ship. The #Rooswijk1740 project is managed by the Cultural Heritage Agency of the Netherlands and Historic England.

From June 18 until August 15, 2018, a team of maritime archaeologists will continue the research and excavation of the Rooswijk. In 2017, the #Rooswijk1740 project was started by the Cultural Heritage Agency of the Netherlands, commissioned by the Minister of Education, Culture and Science. Archaeological research, but also historical and genealogical research, has provided us with more new information about what happened in January 1740 with the ship that was lost off the coast of England.

The Rooswijk story can now also be seen online in a virtual exhibition (in Dutch), based on what we now know after the first year of research: http://rooswijk.huygens.knaw.nl/