From the Netherlands to the East

The Rode Hert was built on a VOC yard in Amsterdam, in the year 1658. The vessel first sailed from Goeree (the Netherlands) on 27 May 1658, arriving in Batavia (Jakarta, Indonesia) on the 19th of November that same year. It was dispatched on various voyages within the East, including several trips from Batavia to Tonkin (Vietnam) and back.

It ends with fire

After returning home to the Netherlands in 1663, the vessel was again dispatched to Batavia in 1664, where it arrived on 14 December. In 1665 the Rode Hert was sent from Malacca (Malaysia) to Nagasaki (Japan) arriving there on the 4th of July. Three days later, a fire erupted on board and soon after the vessel foundered. Luckily the Dutchmen managed to salvage a great deal of the cargo.

From 1641 to 1859, the Dutch held a trading post on a small, artificial island called Dejima, situated right at the waterfront of Nagasaki city. This island of approximately 13,696 m² served as the bottle-neck through which Japan remained connected to the western world throughout a period now known as the Sakoku-Jidai (1641-1853). This was a period during which Japan had virtually shut itself off from the outside world, in order to marginalize foreign influences. At the time, the Dutch were the only western country to trade with Japan. Apart from trade, Japan looked to the Dutch for importing rarities, documents, literature and all things foreign in order to keep updated on developments in the outside world. This brought about a whole new branch of study which was called rangaku or 'Dutch Learning'. It encompassed myriad subjects related to western sciences and world views, including subjects such as medicine, the military arts and philosophy. After Japan reopened its borders to the rest of the outside world in 1853, the Dutch lost their trading privilege and other nations such as the USA soon took hold of business. 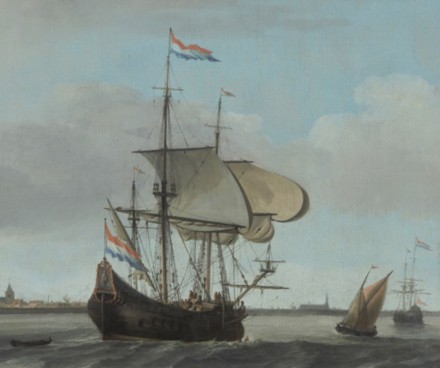 A fluyt at an anchorage (not the Rode Hert). Source: Amsterdam Maritime Museum.