The Prins Maurits had been in service for the WIC chamber Amsterdam since 1640. She left Texel on 21-12-1656 together with the Vergulde Beer and the Gelderse Bloem. On board were 113 passengers with destination New Netherland.

Prince Maurits arrived at the height of Delaware in early March but was blown past the goal by a storm to Matouwacks (Long Island). The ship was stranded on Fire Island. The Natives called the island Secoutah.

The people on board could be rescued with the help of the local indians. The ship was shattered into thousands of pieces in the surf, according to the official J. Alrichs report. Gouverneur Stuyvesant was informed and sent a boat to pick up the survivors. All the crew survived the disaster thanks to the help of the indigenous people.

"…… The Lord God not vouchsafing, this through the ignorance of the skipper, pilot and others of the ship's officers, about eleven o'clock on the night of the 8th of March after we had sailed that day in 26, 18 and 16 fathoms of water, although the skipper, pursuant to my customary warning, had promised not an hour before to take good care and spare the lead, and that he should quickly cast anchor and then come into the cabin to report or communicate the matter, yet the men unexpectedly called out eight and nine fathoms. Wishing thereupon, to tack, and the ship refusing, she immediately struck, and so shaved, which she afterwards continued to do harder and harder, so that we were not a moment certain whether we should leave there alive or perish. After passing through most of the darkness of that night in the greatest anxiety and fear, we found ourselves, at day-break, about a gunshot from the shore, but being between the shores and the strand in such a bad position, and ignorant whether this place was south or north of the Manhattes, it was unanimously resolved, first to save our lives and then to exert every nerve to save as much as we possibly could.
Accordingly on the 9th of March, in severe, bitter and freezing weather, with drifting ice, after great trouble, dangerous breaks in a very leaky boat, with considerable water in it, we succeeded in reaching the shore on a broken split of foreland, on which neither bush nor grass grew, nor was any tree or fire-wood to be found. On the third day we, for the first time, saw and spoke to some Indians, who informed us that it was the foreland of Long Island, and that the place was called Secoutagh. Meantime, the ship getting nearer the shore, we, from time to time unloaded and saved all the dry articles. Having met and experienced this misfortune, I sent an Indian, with advice thereof, to General Stuyvesant, who immediately sent us a small sloop and came, himself, on the second day after, to us at the above place mentioned, which lies about twenty leagues north of the Manhattes. On the other, or land, side of said place a small opening or inlet to a river has been discovered, which a small sloop can enter; but most of the goods were brought overland to the other side to be loaded on the river. Working with great labor and industry, I have discharged most of the goods, as far as it was possible, and brought them to the above name place; but before they could all be got out, the ship stove into a thousand splinters and pieces….." 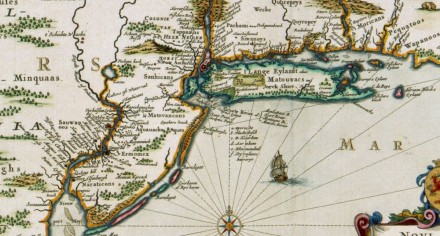