The Prince of Wales had a brief but active career, helping to stop the Bismarck and carrying Churchill to the Newfoundland Conference; however, her sinking by Japanese land-based bombers in the Far East in 1941 is one of the events that led to the end of the battleship being considered the predominant class in naval warfare.

She was involved in several key actions of the Second World War, including the battle of Denmark Strait against the Bismarck, operations escorting convoys in the Mediterranean, and her final action and sinking in the South Chinese Sea in 1941.

In late May 1941, while still not fully operational, she was sent into action with the German battleship Bismarck and received significant damage from heavy gunfire.

Following repairs, Prince of Wales carried Prime Minister Winston Churchill across the Atlantic to Newfoundland. There, on 9-12 August, Churchill joined U.S. President Franklin D. Roosevelt for the Atlantic Charter conference, the first meeting between the two English-speaking leaders of what was emerging as the "Grand Alliance" against the Axis powers.

Sent to the Far East on 25th October with the battlecruiser HMS Repulse to counter the swiftly developing Japanese threat in the region. She docked in Singapore on 2 December.

Sinking of the Prince of Wales

On 2:11 on 10 December Force Z was dispatched to investigate reports of Japanese landing forces at Kuantan. On arriving there they found the reports to be false. In the meantime FOrze Z was spotted by a Japanese submarine.

At 11:00 that morning Japanese bombers and torpedo aircraft began their assault on Force Z. In a second attack at 11:30 torpedoes struck Prince of Wales on the port side, wrecking the outer propeller shaft and causing the ship to take on a heavy list.

A third torpedo attack developed against Repulse but she managed to avoid all torpedoes aimed at her. A fourth attack by torpedo-carrying Type 1 "Bettys" sank Repulse at 12:33. Six aircraft from this wave attacked Prince of Wales, with four of their torpedoes hitting the ship, causing flooding. Finally a 500 kg bomb hit the catapult deck, penetrated through to the main deck and exploded, tearing a gash in the port side of the hull.

At 13:15 the order was given to abandon ship and at 13:20 Prince of Wales sank, with Vice-Admiral Tom Phillips and Captain John Leach among the 327 fatalities. Prince of Wales and Repulse were the first capital ships to be sunk solely by air power on the open sea (albeit by land-based rather than carrier-based aircraft), a harbinger of the diminishing role this class of ships was to play in naval warfare thereafter. 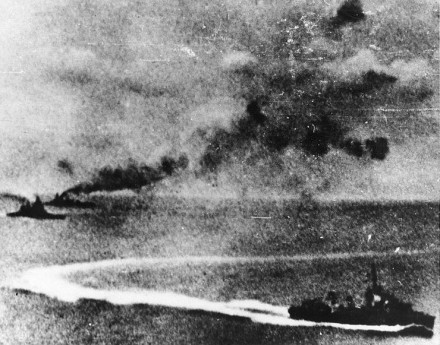 To the left HMS Repulse and Prince of Wales.

It is often pointed out that a contributing factor to the sinking of Prince of Wales was her surface scanning radar being inoperable. 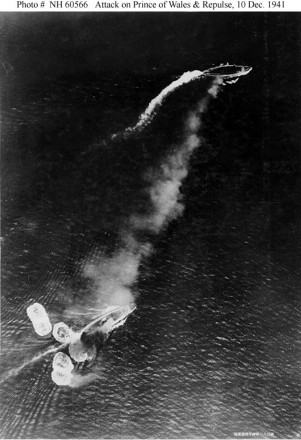 The Newfoundland Conference was held at Argentina Bay, Newfoundland from August 9 through August 12, 1941, to discuss Allied war strategy. It was a meeting between the United States and Great Britain. One significant point to note is that the United States had not entered the war, making this a meeting between a belligerent and non-belligerent nation. On the picture, conference leaders during Church services on the after deck of HMS Prince of Wales. President Franklin D. Roosevelt (left) and Prime Minister Winston Churchill are seated in the foreground. At this conference Roosevelt and Churchill developed a friendly relationship, this being the first time that they had met in person. The result of this conference was the Atlantic charter, which outlined Allied intentions for the postwar period. 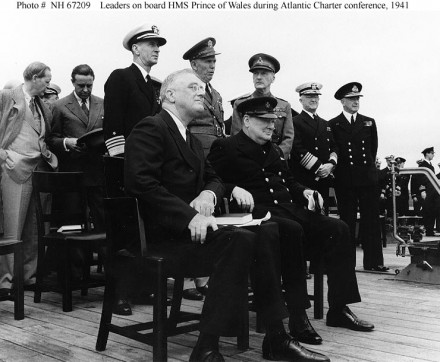 A King George V-class battleship of the British Royal Navy. Built at the Cammell Laird shipyard in Birkenhead, England. Laid down in 1937, completed on 31 -3-1941. 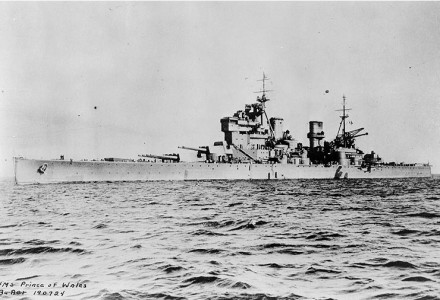 The wreck lies upside down in 223 feet (68 m) of water, near Kuantan, in the South China Sea. A British flag attached to a line on a buoy tied to a propeller shaft is periodically renewed. The wreck site was designated as a 'Protected Place' in 2001 under the Protection of Military Remains Act 1986, just prior to the 60th anniversary of her sinking.

The ship's bell was manually raised using closed-circuit mixed-gas rebreathers in 2002 by British technical divers Gavin Haywood and George McClure with the permission of the Ministry of Defence and blessing of the Force Z Survivors Association. It was restored, then presented for permanent display by First Sea Lord and Chief of Naval Staff, Admiral Sir Alan West, to the Merseyside Maritime Museum in Liverpool. It is currently traditional for every passing Royal Navy ship to perform a remembrance service over the site of the wrecks.