The ship was sent to Port Arthur in October 1901 where she was assigned to the Pacific Squadron. During the the Russo-Japanese War (1904-05) she was attacked and hit by the Japanese fleet. Shewas able to reach Port Arthurwereguns were stripped from the ship to reinforcethe defenses of Port Arthur. The Japanese army reached higher ground with her siege guns and hit the Peresvet many times. 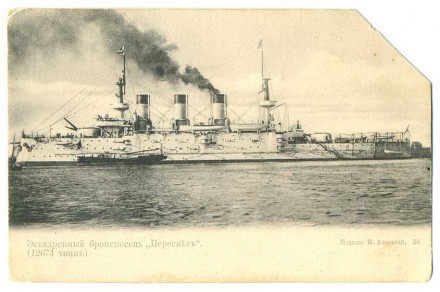 1904 postcard of the Peresvet.

After the end of the war, she was refloated by Japanese engineers on 29 June 1905, reconstructed and was taken into service as the Sagami. The ship was thoroughly rebuilt at Yokosuka shipyard between 1905-08. Sagami was re-designated as a first-class coastal defense ship in April 1908.

When in World War I Japan and Russia became allies the ship was sold to Russia(March 1916). She arrived in Vladivostok on 3 April 1916, where she resumed her former name of Peresvet and was classified as an armored cruiser. On her way to the Russian Arctic flotilla she paused in Port Said, Egypt at the beginning of 1917. On the 4th of January just 10 miles from Port Said she struck two mines and catched fire. 167 men died.

Originally built for the Imperial Russian Navy, the Peresvet served the Japanese navy between 1905-1916 as the Sagami, before it was resold to the Russians. 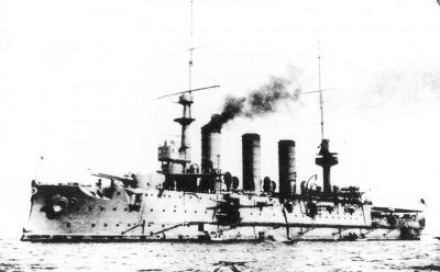 As the Sagami in 1906. Source: Wikipedia Commons.