On September 14th 1606, after a nine months voyage from Cochin, India, and a three month stop in the Azores, the Nossa Senhora dos Mártires arrived in Portugal. A heavy storm forced the drop anchor off Cascais, a small village a few miles from Lisbon. Captain Manuel Barreto Rolim desided to seek shelter in the Tagus estuary. On manouvering to do so the ship sunk in front of the São Julião da Barra fortress in a matter of hours.

Her main cargo was pepper. A large amount of pepper was saved and put to dry. The population also salvaged a notable quantity, as it was impossible for the soldiers to stop the locals who, despite the dreadful weather conditions, every night went to the sea in small craft to salvage what they could. During the subsequent summers, the officers of king Felipe III of Spain - who was also king Felipe II of Portugal - may have salvaged a great part of the cargo from the shallow waters, and they certainly rescued cables, anchors and guns.
(source: DANS, and Texas A&M University)

Portuguese East Indiamen. Wrecked at São Julião da Barra in the Tagus. Only a part of the hull remains. Probably the Nau Nossa Senhora dos Mártires. 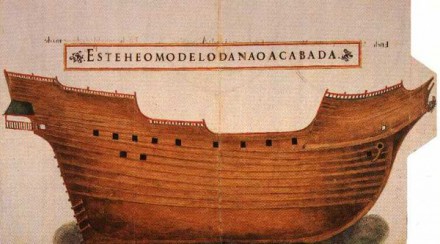 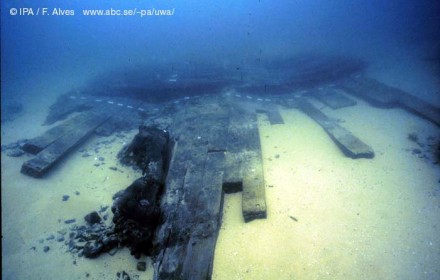 Part of the hull. 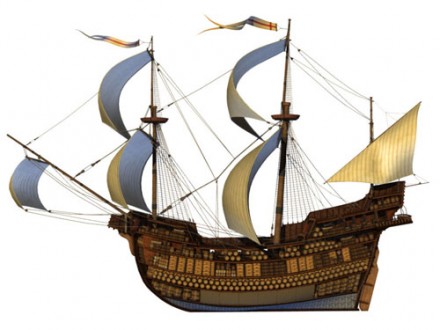 The wreck was found in 1993, during an archaeological survey promoted by the
Museu Nacional de Arqueologia under the direction of Dr. Francisco Alves, and
excavated in 1996, 1997, 1999 and 2000. This was one of several wrecks found in
the area in São Julião da Barra at the mouth of the Tagus river, only a few miles off  Lisbon.