The Peperbael was a fluyt built in the year 1661 on a shipyard in Zeeland (the Netherlands). On 25 January 1662 she set out on her first voyage towards Batavia (present-day Jakarta, Indonesia), where she arrived on 7 June 1662.

According to the daily diaries kept at Casteel Batavia of the year 1663, the Peperbaal was supposed to sail from Formosa (Taiwan) to Nagasaki, Japan, yet the fluyt failed to reach its destination. Another fluyt called the Kluiverskerke was en route towards Nagasaki as well, and reported to have encountered a great storm on the 27th of August. Two days later, while in sight of Meaxima island, the crew of the Kleverskerke saw what appeared to be parts of a ship drifting in the water.

The crew managed to salvage a large wooden sculpture of a man, which must have been attached to the stern of the ship, and a red beam thought to belong to the cabin of a ship. Another find fished up from the waters was the lid of a chest featuring under the clasp the coat of arms of the Dutch city Delft and the initials C. d. d. L. The initials gave the crew of the Kleverskerke the idea that it had to belong to the captain of the Peperbaal whom they knew as Cent Dirksz de Lange. Summing up the evidence, the crew of the Kleverskerke figured that the Peperbaal must have wrecked on the cliffs at Meaxima (Chijs 1891, p. 650).

Meaxima Island is a Dutch corruption of Me-shima; one the larger islands of the Danjo-Gunto island group. Dutch sailors, and other European sailors alike, used to recognize the Danjo-Gunto as one island rather than a group. The sighting of Meaxima (often Maximaor Meaxuma) was mentioned in quite a lot of captain's logs, as its position roughly marked the border between the deep sea and the more shallow waters surrounding the Japanese Archipelago. The DAS database erroneously states the Peperbaal shipwrecked at the Mishima-Islands, which lie further south near the cape of Kagoshima, though this is too far off from the regular route towards Japan. 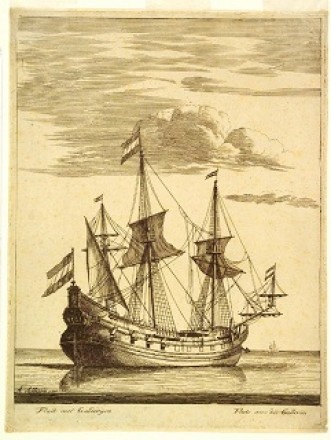 A fluyt at an anchorage (Not the Peperbaal). Source: Scheepvaartmuseum Amsterdam. Painting by Allard, Abraham.