The Oostvoornse Meer (Oostvoornse Lake) was created in the 1960s by the construction of the Brielse Maasdam in the 1950s and the Brielse Gatdam in the 1960s, both part of the extensive water management projects undertaken around Rotterdam. After the area was closed off, forming the lake, sand excavation in the lake was undertaken to provide sand for the construction of the Maasvlakte 1.

This revealed a high concentration of wrecks underneath the lake bed. The sand at the bottom of the waterway would have quickly swallowed any wrecked vessel, and worked throughout the centuries to highly preserve any remains. Unfortunately, the changes introduced to the waterway presented a danger to the remains in the lake. The sand mining exposed and disturbed many of the wrecks, ranging from partial disturbances to total degradation, and many wrecks that were previously buried are now exposed. This has led to a high rate of sports diving and illegal excavation of the wrecks. Another threat to the shipwrecks is the timber-eating worm Teredo navalis, also known as the naval shipworm. Although the closure of the lake led to a freshening of the water, efforts since 2007 to re-salinate the lake have led to a recurrence of the worm. The timber wrecks lying in the Oostvoornse Meer are at a high risk of destruction due to this organism.

The area was a very busy waterway for shipping since the late Middle Ages, and the lake presently contains the remains of more than a dozen wrecks spanning from the 16th-20th centuries, although most date from the early 17th century. This is most likely due to the presence of an infamous sandbank during that time, which was referenced on a map from 1645 as de Hondenplaat.

Between November 1987 and 1988 a group of divers discovered a shipwreck in the Oostvoornse Meer. During these months they removed a great deal of the sediment which covered the wreck and found some interesting artefacts: a swivel gun, three mortar bombs, a pair of dividers, sherds of Spanish or Portuguese olive jars, sherds of Dutch earthenware, a Chinese jug, seeds of olives and grapes and some small objects.

When the greatest part of the wreck had been cleared and 80% of the finds had been removed, the finders notified the Department of Underwater Archaeology of the Ministry of Education, Culture and Science of the Netherlands. It was decided to excavate what was left in an archaeological way. The artefacts which had already been discovered and those which were found during the archaeological excavation were analysed and described. 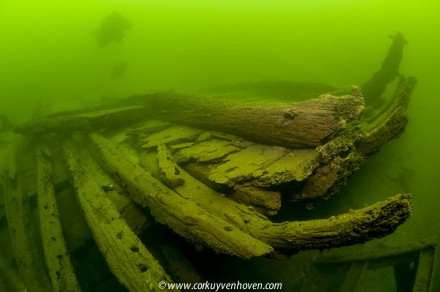 Based on the artefacts and with help of a special scheme, the conclusion was drawn that the wreck was originally a late 17th-century Dutch trading vessel that went down between 1710 and 1725-1740. Sherds of Spanish or Portugese olive jars and olive stones proved that the ship had visited southern Europe. The seeds from a special type of grape (Vitis vinifera) used for making raisins, would have been taken aboard in the harbour of Malaga (southern Spain). This means that the ship was a Straatvaarder, as the ships were called that traded on the Mediterranean. On her return voyage, she was wrecked while waiting for the right tide to enter the harbour of Rotterdam (Kleij 1993). 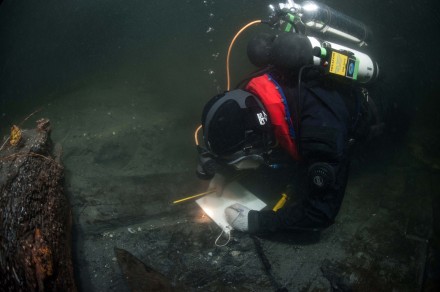 Archaeologist working on the site during 2014 Topsites Project

The wreck site in Oostvoornse Meer is thought to be a straatvaarder, a Dutch fluyt that would have traded through the Strait of Gibraltar between the Mediterranean and the Netherlands. The wreck site Oostvoornse Meer 8 is likely to be a wreck of a Dutch merchantman, built in the late 17th century and sunk between 1710-1725. From observations made of the wreck site, the length of the ship seems to be 15.5 m, and the width 7 m. 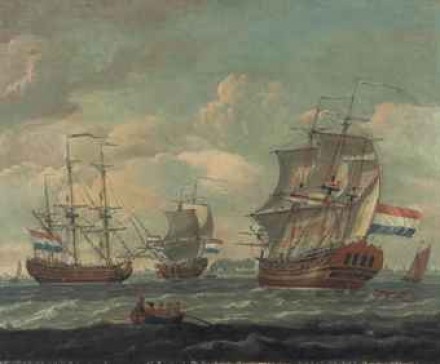 A painting of 18th-century Dutch merchantmen. 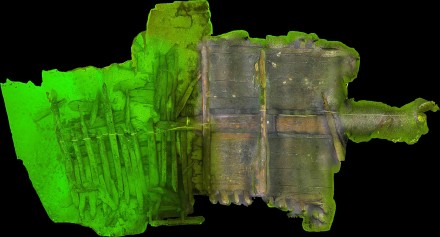 3D-photogrammetry overview of the OVM 8 wrecksite.