The boat was found together with two other vessels in a bog in present day Denmark. The ships are part of war-spoil along with large quantities of weapons and other warfare equipment. The ship had been deliberately sunk in the freshwater lake after being hauled only a short distance over land. The ship has recently been dated via dendrochronology to 310-320 AD, and the deposition is likely to have taken place 340-350 AD.

Because of the outbreak of the war between Denmark and Prussia in 1864 the excavations had to be cancelled, and the timbers of the Pine Ship were lost in the turmoil. With the conclusion of peace Denmark had to part with the Nydam find altogether, and the Nydam Oak ship was moved from the former Danish town of Flensborg to Kiel in 1877. In 1941 the ship was moved again, and spent the rest of the second World War on a barge on a lake, and was finally moved to the Archäologisches Landesmuseum in Schleswig were it is still on display. 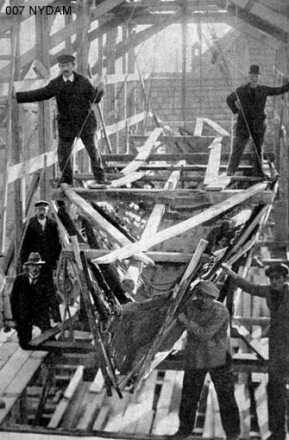 The number of oars have been established with some certainty to 15 pairs, of which maybe one has been added during the working life of the ship. 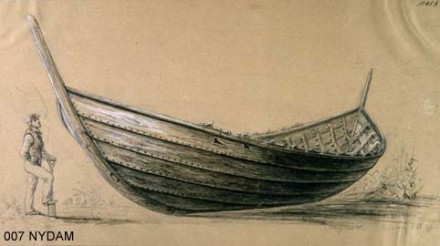