In 2005, three East Sussex divers stumbled upon a large pile of iron cannons in Normans Bay, whilst trying to free a lobster pot. Shortly after the discovery, surveys were carried out on the 'Norman's Bay wreck' by Wessex Archaeology. Between the wooden ribs and planking of the ship, protruding from the seabed, they recorded three 24-pounder cannons, seven 12-pounder cannons, fifteen 6-pounder cannons and two 3-pounder cannons along with several that were too deeply buried or concreted to be measured.

The archaeologists also encountered a layer of uniform red bricks scattered around, along with various pieces of thin copper sheeting which may represent fragments of the ship's kettle. Taking the length of the visible remains as a guide, the vessel was estimated to have been approximately 40 m long, with a breadth of around 12 m. The ship's size and its armament clearly suggested that the ship was a 17th or 18th century warship. 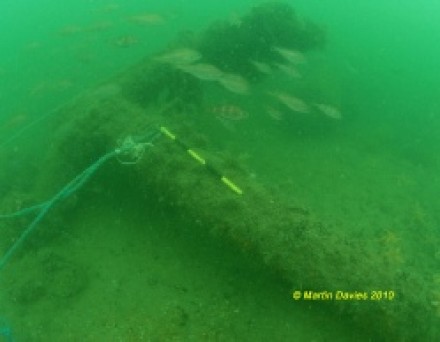 After its discovery, many believed the Normans Bay wreck to be the remnant of HMS Resolution - a 70-gun third rate warship that sank in the bay during the great storm of 1703. However, after dendrochronological analysis, the wood of the hull section appears to have originated in Germany or the Low Countries, with a felling date shortly after 1659. Although the Royal Navy could have imported the timber, it is thought to be more likely that the wreck is a Dutch ship.

Recorded losses in Norman's Bay indeed include several Dutch men of war, lost in 1690 at the Battle of Beachy Head. This battle was fought between an allied English and Dutch force against the French, during the Nine Years' War (1688 - 1697). Heavily outnumbered, the Dutch under command of Cornelis Evertsen, quickly engaged in the attack, but found itself poorly supported by the English.

Although Evertsen managed to save much of his squadron by suddenly anchoring while under sail, causing the enemy fleet to be carried away with the tidal stream, the battle resulted in a crushing defeat, with heavy Dutch losses. Of the Dutch ships Friesland, WapenVan Utrecht, Maagd van Enkhuizen, Elswoud, Tholen and two unknown vessels, three are supposed to have sunk in Normans Bay. 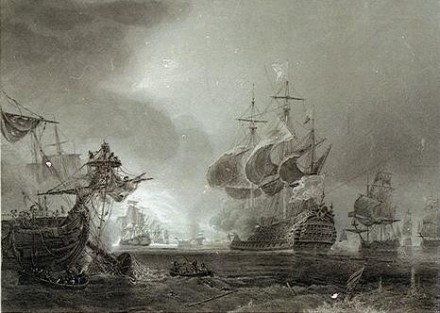 The Norman's Bay site, lying at a depth of 7 to 15 m, appears to be relatively stable, although some increased exposure of timbers has been noted in the southwest of the site. As part of the recording process in 2007, two iron survey pins used as a baseline for the post excavation plan have been left on location for sediment monitoring purposes. As the site also seems to be undisturbed by salvage attempts, it surely holds important information on 17th century warship technology. Even though the Norman's Bay Wreck it hasn't been conclusively identified, it has been a protected wreck under the Protection of Wrecks Act (1973) since 14th June 2006. 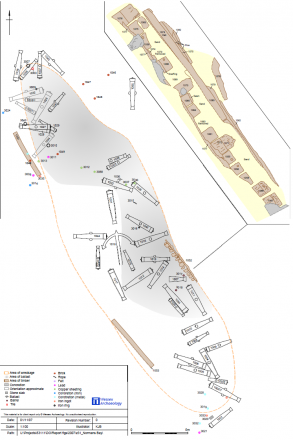