The 'Elmina wreck' was discovered during a 2003 side scan sonar survey by Greg Cook of Syracuse University, who named it after the nearby port town of Elmina, Ghana. Cook's initial reconnaissance of the site noted the presence of two large cannon, large rolls of sheet lead, stacks of brass basins and large clusters of brass manilas, suggesting that the sonar anomaly represented the remains of a European trade vessel. In 2007, a partial excavation of the site was carried out by the same institution, which uncovered some invaluable information on the vessel itself and more generally, on Euro-African trade interactions along the West African coast. 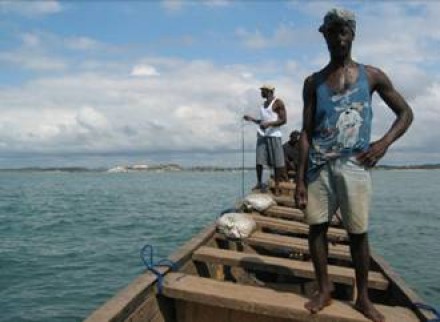 View of Elmina while anchored over the wreck site (Photo by A. Pietruszka).

The 2007 research project was primarily concerned with the vessel's cargo. Material such as various pewter- and brassware, lead rolls and beads offered a unique insight in the type of goods that were traded along the African coast. Adding to this, the overwhelming number of manilas and Cowry shells, which were used as currency in Western Africa for many centuries, showed how European traders adapted to the indigenous economy. After conservation and analysis in the United States, all artifacts collected from the wreck site will be returned to the Ghana Museums and Monuments Board for museum curation and display. 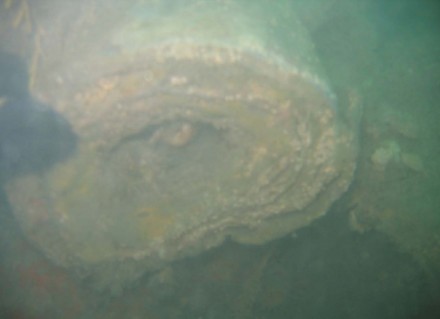 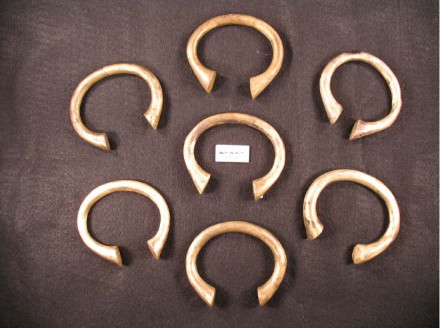 Whatever has been preserved of the ship's construction has remained hidden below a thick layer of concretion. In spite of that, the archaeologists were able to determine the ship's origin and dating through examination of the cargo and radiocarbon dating of the available timber fragments.

In that way, a mid 17th century (1642 - 1664) Dutch origin of the ship was established. This fits with the historic time frame, as between 1637 and 1871 Elmina stood at the center of the Dutch West African trade. Until 1814, Elmina's castle served as a depot for slaves bought from African traders in exchange for European goods, such as those found on the Elmina wreck. 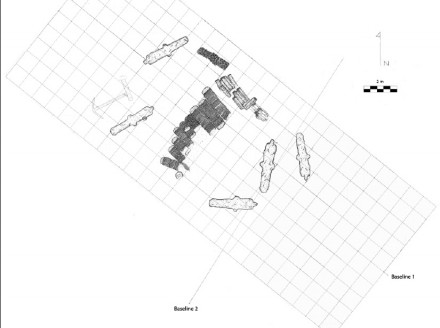 Site plan of the Elmina Shipwreck site, 2007 (Map by A. Pietruszka and G. Cook)

The only ship known to have been lost in the bay of Elmina during the mid-17th century was the Dutch West India Company merchant vessel Nieuw Groningen. An historical account mentions the ship's arrival at the Elmina roadstead on February 28,1647. When a salute was fired, the cannon exploded, thus setting the ship on fire and causing it to sink.Numerous pieces of charred wood that turned up in sediment cores collected at the site testify of the dramatic event that took place over 360 years ago. 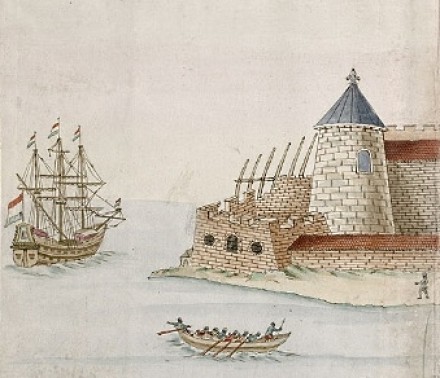 In 2009 the wreck site was monitored by Syracuse University, and following the patterns observed between 2005 and 2009, it is assumed that the Elmina wreck site at this point is now completely covered with sediment. Therefore, despite the lack of legal protection of submerged archaeological sites in Ghana, the wreck site is considered as protected as it ever could be.

Another monitoring dive was planned for a 2013 survey campaign, sponsored by the Dutch Cultural Heritage Agency. However, the project has been suspended following the sudden tragic death of its initiator, maritime archaeologist Rachel Horlings of Syracuse University. Undoubtedly, the wreck and Ghana's rich maritime history will continue to attract the interest of many archaeologists and historians.