Ever since its 1966 rediscovery in a bed of seagrassin Monte Cristi Bay, the Pipe wreck has been well known among Monte Cristenos and many Dominicans scattered about the island. Since then the site, lying at a mere 4.4 meters depth, has repeatedly been visited by treasure hunters and souvenir collectors. Its history of salvage is however thought to extend back centuries. When archaeologists of the Monte Cristi Shipwreck Project arrived at the site in 1991, the obvious question was whether or not there were sufficient archaeological data left to accurately interpret the site.

At that time, the visible portion of the site is comprised of scattered ballast stones, ceramic sherds, concreted iron cooking cauldron fragments, and an estimated 500.000 smoking pipes, which had given the wreck its popular name. Careful study of these artifacts led the research team to hypothesize that the remains were of an inbound Dutch merchant vessel that wrecked in the middle 17th century. The results of many years of excavation, historical research and analysis of artefacts carried out since support this idea, which would make the wreck one of the few known Dutch shipwrecks in the New World.

Despite possibly centuries of salvage, and although the Pipe Wreck has still not yet been fully excavated, its remnant cargo has shown to be one of the largest and most diverse of any inbound merchantman destined for the Americas. Around 10.000 mostly uniform pipes have been collected at the site, representing the largest aggregation of smoking-related artifacts ever recovered from a shipwreck, and possibly from any known archaeological site. Interestingly, a small portion of the collection consisted of clear imitations of Native American ritual pipes, which uniquely shows how Dutch manufacturers responded to the indigenous market.

Along with the ceramic finds, the typically Dutch cargo compares well with archaeological collections from upstate New York, and specifically the Dutch-American settlement at Fort Orange. This not only provides us with a likely origin of the ship, but also with a possible destination. Before sailing there, the vessel may first have ventured search of salt, leather and tobacco, all of which were abundant in 17th-century Hispaniola, in whose waters the shipwreck was found. It may also have sought to trade with the contraband Istasand buccaneers common to the region in this period. Thus the Pipe wreck was clearly involved in triangular trade a practice relatively few shipwrecks can provide information on. Before the ship could reach its destination, it is likely that an explosion put an end to its voyage, as is testified by the large quantities of charred wood, melted metal and glass at the site.

A large part of the wrecks ceramic cargo is composed of Rhenish stoneware, such as this Bartmann-jug (source: Hall 2006).

Funnel type pipes consist of 93% of the excavated pipes of the wreck. The funnel type followed the bi-conical type from the mid 17th century. The city of Gouda in Holland was the centre of pipe industry. The funnel type was most populair from 1650-1740. 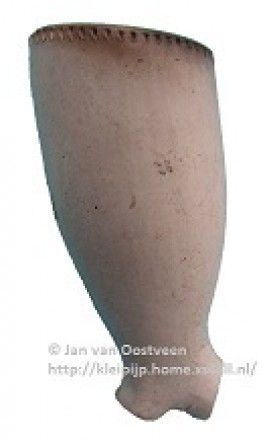 The ship and its sailors

Partially buried under the cargo and layers of concretion, a considerable part of the ships hull has survived. Timber analysis suggests that the vessel was constructed in England sometime after 1642. It was also found that the hull had been coated with tar and cow hair, and covered with protective outer boards, a common 17th-century measure of protecting the ships hulls from biological degradation caused by shipworm and bacteria.

Aboard the ship, the sailors enjoyed a varied diet of beef, pork, salted fish and conch, as indicated by faunal remains. Also olive pits and other fruit stones appeared regularly in dredge screens. Occasionally, it seems they had to compete with vermin for these foodstuffs, as evidenced by animal bones that bear rat incisor marks.

A diver excavates the hull of the Monte Cristi Pipe wreck (source: Hall 2006).

Even though the wreck site has been heavily disturbed over the course of the centuries, the wreck site was found to contain sufficient data to effectively reconstruct the vessels construction, lading, voyages and demise. Research of the wreck has thus made clear that not all disturbed archaeological sites should be viewed as worthless. Even so, measures have been taken to protect the tremendous research potential of the remainder of the Pipe wreck. Its timbers now lie buried beneath a protective covering of tarpaulins, sandbags and a meter-thick layer of sand and coral rubble. Also, the Monte Cristi Shipwreck Project team has invested significantly in raising awareness of the wrecks importance among local officials, fishing boat operators and tourist guides.

A diver uses a dredge screen to sift for objects buried in the sediment (source: Hall 2006).