MFP (Marine-Fährprahme). Ca. 700 landing crafts called Marine fährprahm have been built for German Kriegsmarine. The properties of these vessels, mainly the small drought were suitable for versatility operations. Otherwise high waves restricting operation at sea. The type has been built at several different ship yards. Maybe this is the reason for many variants of equipment and weapons.

The wreck was removed / salvaged by the ministry of infrastructure and environment (RWS) because of safety reasons. As a relict of a second world war military ship, the presence of ammunition was considered high. Diving on the site was forbidden, but still continued. To ensure no accidents would happen, RWS decided to remove the wreck. 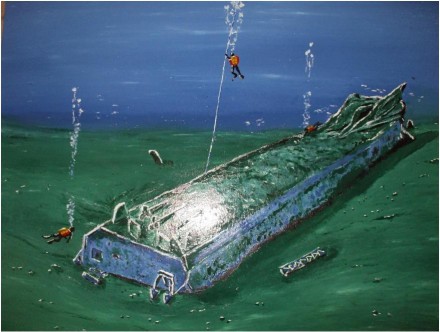