The boat sank accidentaly during winter time. With belongings of the skipper still on board. The Meern 1 had a fairly luxurious cabin with bed and chest and a separate galley.

The ship was built elegantly with high quality oak. It's size and narrowness (1:9,1) indicates that the vessel was not a regular bulk freighter. More likely for post, light cargo and personnel on short voyages on the Rhine.

The skipper was probably a carpenter who had manufactured his own furniture and repairs on the boat. The toolbox was discovered near the vessel. Remains of two pairs of his shoes have been found in the cabin (size 45). Just outside the boat a size 35 emerged suggesting a second crew member; a boy or a woman.
The skipper knew how to read and write, three Roman styloid were discovered in the cabin. It is possible that he was a veteran or a Romanized local Batavian, trading and traveling from Roman post to post. 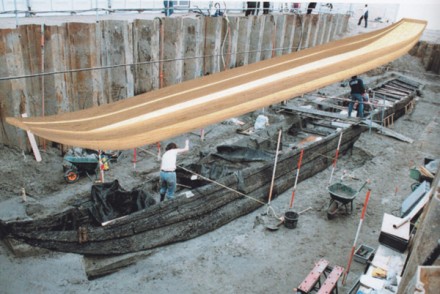 From ca. 50 AD until 230 AD the lower Rhine in the Netherlands was part of the border of the Roman empire (limes). There were some twenty Roman fortresses (castella) along the (lower) Rhine in The Netherlands to guard the border. Traffic and trade was intense. The Meern 1 was operating between 150-200 AD in the region. Maybe at first as a military supply vessel. But in it's later days as a civilian freighter supplying army posts on the limes with goods and people. 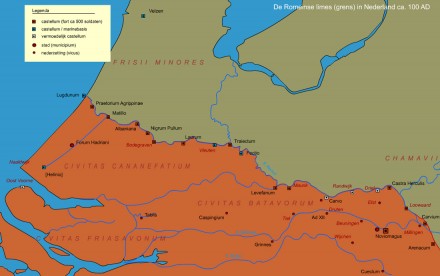 Limes section in the Netherlands.

The boat is one of the best preserved Roman ships ever found. 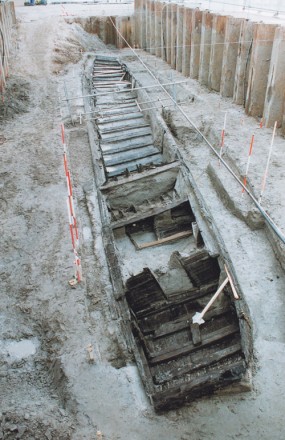 The Meern 1 during excavation.

The Meern 1 is on display in castellum De Hoge Woerd in Leidse Rijn Utrecht.