A joint diving expedition between the former coordinator of underwater archaeology in the Netherlands and the sport diving club Shadow Diving was organized after a new wreck was located in the summer of 1980. During the expedition it was stated that the wreck was that of a seaworthy late medieval vessel that looked 'cog alike'.

The hull was clinker built and the bottom was carvel built, which is a typical cog type construction. However, it had some diffrences to a cog as well. For example, the stern was placed directly on the keel whereas typical cogs have the sternpost connected to the keel by a keel knee. Suspected cargo is found e.g. boulders (ballast?), slate, flint and stoneware.

In 1982 a second expedition was organised with the main goal to try out a specific measuring technique. With succes, the first drawing was made of the wreck (image 1). The third dive took place in 1983. This time three trial slots revealed several cross sections of the ship. Because of the extraordinary construction it was decided that the wreck would be given the status of a protected monument. 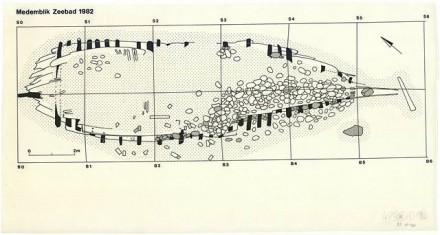 Drawing of the shipwreck.

In 2005 the divers of the LWAOW (National working group archaeology underwater) were asked to check up on the condition of the wreck. Their impression was that the sand was slowly washing away and exposing the wreck. Samples of the wood were taken for dendrochronological research but without reliable results. This could be because the origin of the wood is not compatible for the test. It is very likely that the ship will be physically protected in a few years due to the increasing rate of exposure.