The slipway runs from the southern quay of the harbour 7 metres into the Westerhaven of Medemblik. The construction is 3 metres wide. It consists of two rows of planks standing upright and orientated North-South. The planks are about 4 to 6 cm thick (A & B). The western row of planks is on the outside sheeted with copper. On the inside one can find a heavy wooden beam, 10 to 12 cm wide and 50 cm high (C). On the eastern row of planks, this beam is missing (D). There are 5 heavy beams lying parallel to each other between the two rows of planks. 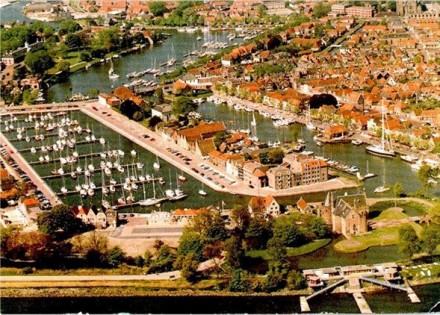 Medemblik with the Westerhaven top left.

These beams are 2,56 to 2,67m long,28 to 50 cm wide and 40 to 50 cm thick (E to I). The beams make up the floor of the slipway and are secured in the (water)bed with a vertically inserted beam (J). These vertical beams have a size between 17 and 28 by 7 to 8 cm. It is not known how long they are and therefore how deep they penetrate the sediment.

When we look into the history of the area of the Westerhaven (Western harbour) in Medemblik, we can give an indication of the period within the slipway has been used. In 1631 the Westerhaven (or Wester Nieuwe haven (Western New Harbour)) was constructed. In 1632 the municipality of Medemblik decided that all dockyards had to be concentrated on the south side of the harbour, in orde for the ships not to be of burdon: the Western Harbour was the most western of the new harbours of Medemblik at that time. It is also know that the City dockyard was situated around there.

On the 21st of April 1797 at a national assembly it was decided by decreet that the harbour of Medemblik should become the a place for the Dutch Navy ships to rest, to lay and to be repaired. On the 21st of August that same year, the Navy becamer the owner of the Westerhaven and the city dockyard. After that, this dockyard including some private ones were replaced.
In 1807 between two dams a ship lock was constructed half way the Oosterhaven (Eastern Harbour: 1599) in order to control the tidal floods. Due to this, the westerhaven became in fact a dock.

In 1828, the Royal Institute for the Navy (Koninklijk Instituut voor de Marine (KIM)) and its dockyard was moved to Den Helder. After that date, the harbour was used again for civilian use. The dockyards however, were gone.
Based on this information we can say that the slipway must have been in use after 1631 (when the harbour was built) and before 1828 (when the Navy Dockyard was moved to Den Helder).

One wood sample has been dated with dendrochronology. It is part of one of the upright planks of the Eastern plank row (side of the slipway). The tree has been cut after 1778 AD (+-6). Conclusion: The slipway has been in use somewhere after 1778 (+-6) and before 1828.

In the last decennia, a couple of slipways around the old Zuyderzee have been excavated. In 2000 a VOC warf, including a slipway, was excavated in Amsterdam. This slipway is similar to the one in Medemblik if we consider that both have been constructed with neatly cut beams especially made for the slipway. In the cases of the slipways in Zaandam and Hoorn, the floors of the slipways had been constructed with re-used ship parts.

The part of the slipway of the Medemblik Westerhaven 1 site, is the first one we know that is still lying in situ underwater. Of all the other slipways, only the parts that always had been above the water were investigated. We therefore consider it to be of high archaeological value and important to preserve.

The slipway cross section over the length. (Drawing M. Manders).

The slipway seen from the East. (Drawing M. Manders).