Ship 3 from Mainz (type Mainz B) was discovered in the centre of Mainz with the construction of the Hilton Hotel II in 1981/82. In the same trench 4 more ships were discovered. The Mainz 1, 2, 4 and 5 (type Mainz A) had a more specific military function. Guarding and patrolling the Rhine border.

The type can be recognized in the ships Mainz A, and Mainz type B can be called a Navis Actuaria. Actuariae are mentioned by Tacitus and other Roman historians as being in use by the navy as transporters.

A sample of the original shipwood has been dated (with dendrochronology) to the end of the 3th century. The Mainz 3 has been used to strengthen the quay at the end of the 4th century, maybe even in the beginning of the 5th century. Together with the Mainz 1, 2, 4 and 5. So Mainz 3 was almost a century in active duty when it was reused.

31 december 406 German tribes broke through the border near Mainz and invaded Gaul. Vandals and Allemanni. The Roman defense line (limes) actually broke down. It seems that the 5 navy vessels discovered in Mainz were destroyed during this invasion. Vegetius, a late Roman historian, says that the Rhine and Danube rivers are very well protected with small Roman warships called Navis Lusoria.

This stele is a funural stele (date from the first centyury A.D.) from the Roman Naval base at Ravenna in Italy. It is the first picture of a Roman sea soldier. The stele was discovered in 2005. The man was an officer (optio) on a liburna. The ship was called 'Aurata' which means golden. 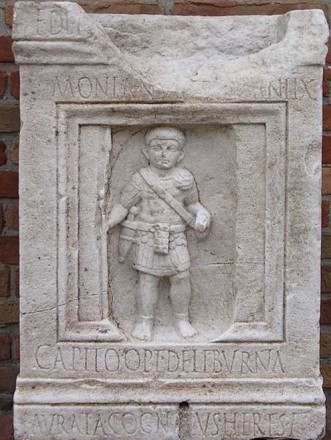 Mainz 3, type B was a late Roman military ship. It was a small cargo vessel for duty on the Rhine. It was designed primary for sailing. It had no ram and therefore was not primary a ship of war (liburna type).

The front section from the bows to just aft the mast-frame (9 meters) was preserved and recovered. On both sides the hull is preserved to the bilge. 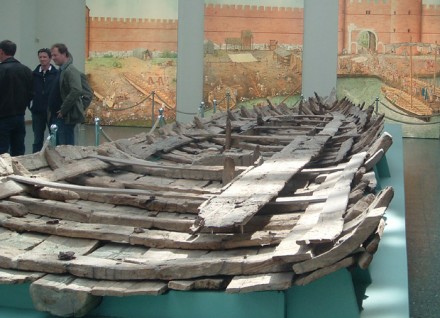 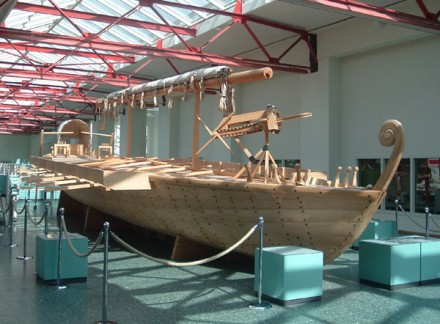