In the second half of the third century a new type of warship was developed to replace the liburna types. The new type was small compared with the previous liburna types. A lusoria had only one row of rowers. This in order to reduce manpower and skill needed to maneuver a ship. The small long ships were very fast and had a ram as weapon.

Because lusoriae were easier to build, to man and were very effectively, patrolling the borders of the Roman empire was much better organized and effective then in the previous period. 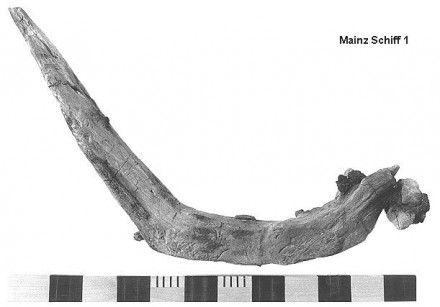 Mainz 1 type A. Navis Lusoria (dancing ship). A small Roman warship developed in the 3th century especialy for service on the border rivers.

It is carvel-built employing 2 cm thick and 20 - 24 cm wide planks set one above another without additional mortise-and-tenon joints. The 2nd and 4th rows of planks are stealers.

There is an obtuse scarf in the 5th row of planks at the stern. The 5 cm thick and 25 cm wide keel has a bilgerinne along the middle. At its stern end a sternpost of a naturally curved piece of wood has been attached. At intervals of 31 - 32 cm the ancient shipwright had scratched the position of the frames on the keel. 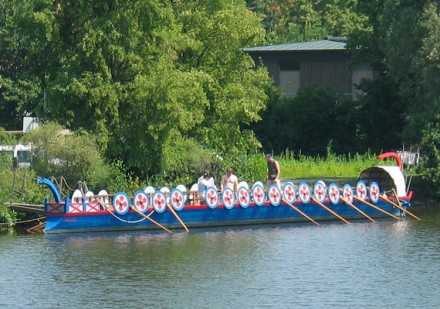 Replica of a Navis Lusoria.