This shipwreck was discovered in the Väike-Väin Sound, dividing the western Estonian islands of Saaremaa and Muhu. It was situated 370 metres off the coast of the island of Saaremaa at a depth of 3 metres, in a natural harbour at the foot of the Maasilinn castle ruin. 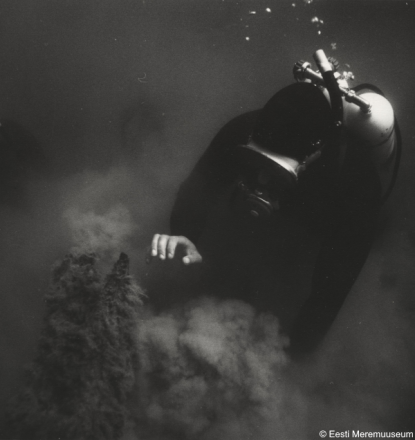 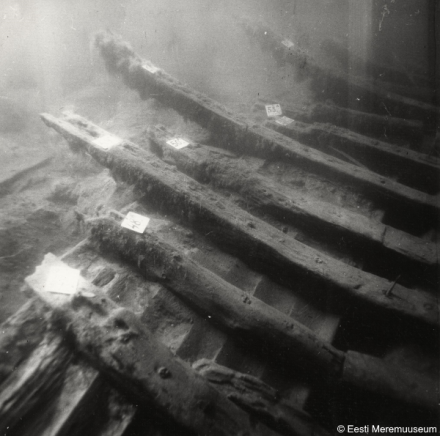 The wreck in situ in shallow waters. 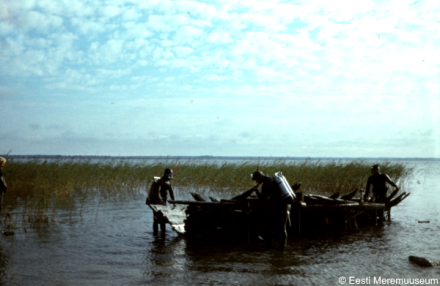 The wreck fragment was lifted in one piece by divers.

The wreck was excavated and lifted in 1987 by Viikar divers, a group of recreational divers interested in archaeology under the lead of Vello Mäss, who became the head of the newly formed division of underwater archaeology at the Estonian Maritime Museum in the following year. The wreck was conserved in a purpose-built facility with PEG (polyethylene glycol) and smaller object were freeze-dried. Owing to the novelty of a fully fledged archaeological wreck excavation and the lack of experience, the wreck was only partially recorded and sampled.

Samples from the clinker planks were dendrochronologically analysed and yielded felling dates in the 1543-1546 range. Almost the entire hull was built of local pine.

The vessel was associated with a small single-masted coastal vessel known as uisk.

The wreck's location and residues of slaked lime in its bilge suggest that it was linked to the castle of Maasilinn (German: Soneburg) and its lime quarry, which was owned by the Order of Teutonic Knights at that time. This period was marked by intensified castle building across the territories of the Livonian Confederation and the vessel was arguably involved in the shipping of lime required as building material. 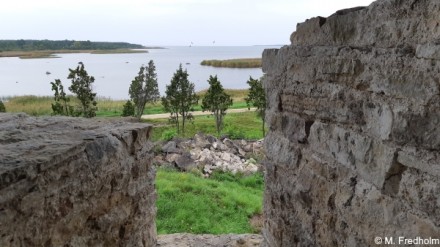 The Maasilinn Ship is the hitherto earliest known type of wreck, in which a secondary layer of carvel planks were fastened on top of an originally clinker-built hull (a so-called “converted clinker”). The exact building sequence is still subject to hypothesis. Another notable feature is the deep bilge-well, achieved by garboard strakes running almost vertically.

Schematic reconstruction of building sequence: (A) I. Arens’ reconstruction, based on the assumption that the garboards are in fact rudiments of a keel and — what has been elsewhere interpreted as recesses for the garboards — as limber holes. (B) V. Mäss’ reconstruction assuming a simultaneous phase for both layers of planking. (C) Alternative sequence proposed by D. Zwick, if the carvel planking was added at a later stage, in which case the clinker-garboards were adzed off. The shading indicates sequence, i.e. the darker the earlier. 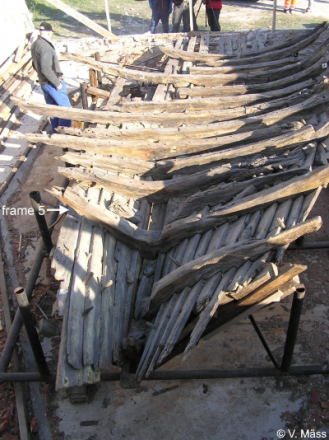 Frame 5 suggests that the deep bilge-well is an original feature and not added in a later building sequence.

The wreck is on display in the Estonian Maritime Museum's Seaplane Harbour in Tallinn since 2010. As earliest archaeological wreck salvage in Estonia, it forms a central part of the museum's collections. 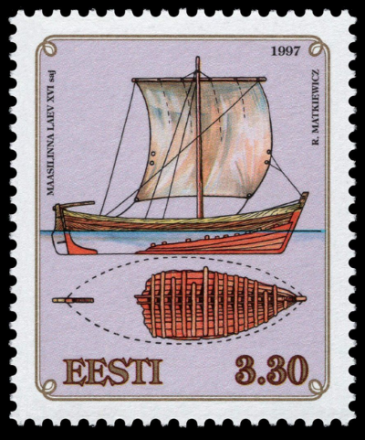 In 1997, the Maasilinn wreck was the only known medieval ship find from Estonia and features prominently on an Estonian stamp. 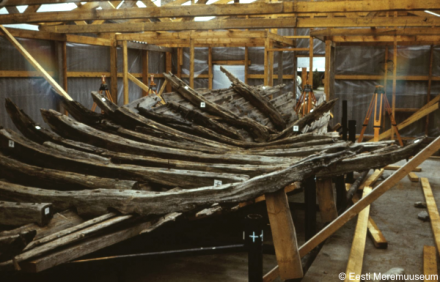 The wreck is placed in a cradle, and stored and conserved in a purpose-built shed. 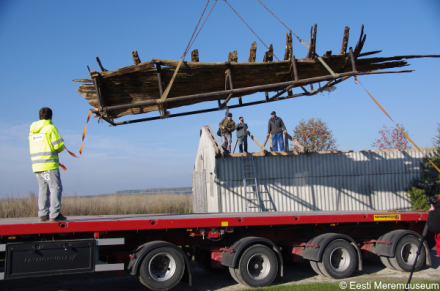 The cradle with the wreck is lifted and transported to the Estonian Maritime Museum in Tallinn. 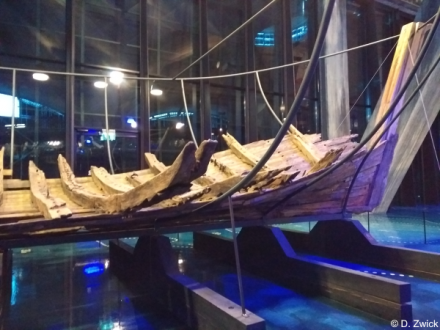 The Maasilinn wreck on display in the Estonian Maritime Museum's Seaplane Harbour today.